Bence Suranyi and Stefan Salaris beat out their Grade 10 civics classmates with their presentation on the Heat Bank.

The school-wide competition is part of the YPI program, which runs similar charitable contests in schools around the world.

Suranyi said their presentation highlighted the success stories of the charity.

“The Haliburton Heat Bank is a less-known charity than the other ones that were competing,” Suranyi said. “I think that helped shed light on the Heat Bank.”

The YPI initiative has run at HHSS for 12 years. The program goes into the curriculum as a graded project for the school’s civics class. The project requires students to engage with charities in their community and share what they have learned in a presentation. The top-five projects compete in front of the school, with the winning group earning $5,000 for their charity.

The group has donated more than $50,000 to local charities since it started running in Haliburton.  Teacher Paul Longo, who co-ordinates YPI at HHSS, said the program remains successful.

“It gets Grade 10 students out in the community, visiting charities, asking questions, learning about what we do in this community that’s so important as far as volunteer work,” Longo said.

Jackson said the charity, which provides firewood and heat to vulnerable people, has participated in projects for YPI before. But this is the first time the charity has won.

“I am just so proud of the work that both of these youth did, in pouring everything into the presentation that won us the money,” Jackson said. “This is one of the largest donations we’ll likely receive this year.“

They were absolutely passionate. They believed in what we were doing,” she added.

Salaris said to succeed in the competition, it is vital to choose a charity you care about.  “Pick a charity you believe in, like and would stand for,” he said. 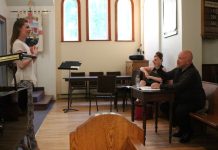 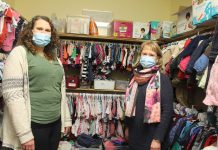