The Highlands Chamber Orchestra is marking its 10th anniversary with a live performance after more than two years off stage.

The orchestra’s ‘Welcome Back Performance’ will feature compositions from James Bond, The Lord of the Rings, Superman and other beloved musical universes. More than 40 violinists, trombonists, trumpeters and more will perform at the Northern Lights Performing Arts Pavilion Nov. 26.

“It’s been a long time in the making,” said conductor Dan Manley.

He said the music was chosen both to suit the orchestra’s strengths and challenge certain sections and instruments. It was “a pretty emotional moment,” Manley said, when the orchestra reunited for practices last year after COVID-19 restrictions halted group gatherings.

“We considered potentially putting on a show last spring, but there were just too many unknowns.” The ensemble was formed in 2012 after a trial run performing with the Highlands Wind Symphony.

“We thought ‘hey, this seems so much fun and so promising’,” said Manley, who was playing tuba at the time. After Glen Carter stepped down as conductor, Manley picked up the baton. “I thought I’d love to do this. And 10 years later, here we are.” Throughout the years, practices and performances tightened the group’s bond.

“There’s quite a family that’s made… seeing each other every Friday and putting on these concerts. It’s very rewarding.” Now, the orchestra is able to share its music with the Highlands. Manley said that’s one of the highlights of being part of it. “It’s that musical rush that you experience in an orchestra,” he said.

“It’s so different than playing in a small group.” The Highlands Chamber Orchestra plays at 7:30 p.m. Nov. 26 at the Northern Lights Performing Arts Pavilion in Haliburton. Tickets are available at Russell Red Records in Haliburton, or by calling 705- 286-0413. 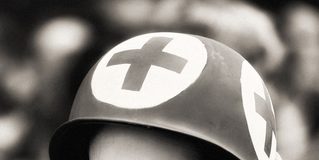