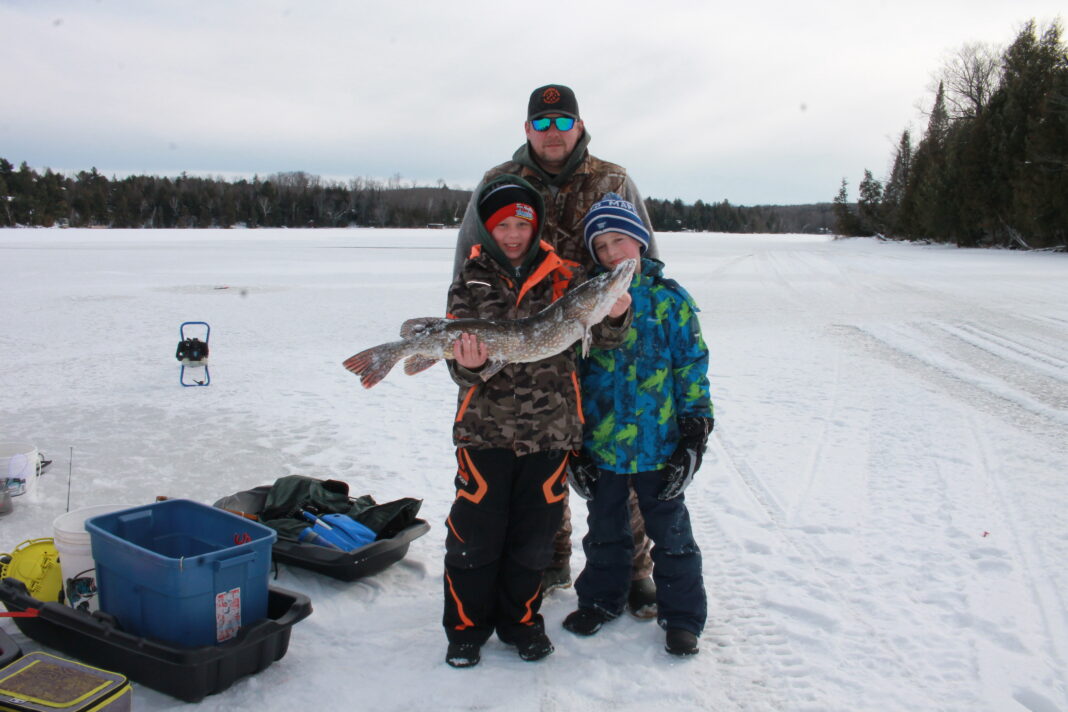 Ontario’s Ministry of Natural Resources and Forestry (MNRF) is proposing new legislation that would outlaw ice fishing of Brook Trout and Lake Trout on all lakes in Haliburton County considered to have low natural populations of the species.

The ministry posted a new draft management plan for Fisheries Management Zone (FMZ) 15, which encompasses the Highlands region, to its website Sept. 29.

A 60-day public consultation is to run until Nov. 28. “The anticipated environmental and social consequences of this proposal are positive,” the ministry states. “The approaches presented aim to balance the ecological and socioeconomic objectives of the region.” FMZ 15 also covers Bancroft, Parry Sound, Pembroke and parts of Peterborough and North Bay.

The MNRF, in its plan, says the zone is experiencing high pressure from a wide group of users, including commercial tourist operators, resident and non-resident anglers, and Indigenous subsistence fishers. Anita Tamrazi, ministry spokesperson, said the changes are being proposed to protect natural Coldwater fish populations, which, she says, have declined in recent years. The current Brook Trout fishing season, which runs from Jan. 1 to Sept. 30, was deemed “excessively liberal” by the MNRF, which wants to cut it in half.

The new proposed season for at-risk Brook Trout lakes is the fourth Saturday in April to Sept. 30. For Lake Trout, the ministry is proposing from the third Saturday in May until Labour Day for all lakes less than 500 hectares in size.

For larger lakes, it’s a one-month season during the winter, from the Saturday before Family Day to the third Sunday in March. For this, only one line may be used when angling through the ice. Fishing on lakes considered to be fully stocked will be permitted, though the MNRF has not released a list of fully stocked lakes, nor outlined what they consider to be a fully stocked lake.

Rob Berthelot, owner of Sandy Lake Resort on Halls Lake, criticized the timing. “It feels like this is an attack on small business,” Berthelot said. “COVID was bad enough, can we not get a reprieve for a little bit? I’m not saying this might not be the right thing to do, but the timing sure does suck. The least they could do is give us a transitional period, so that we can prepare.”

Tamrazi told The Highlander the earliest any proposed change could come into effect is Jan. 1, 2024.

While Berthelot does not directly offer ice fishing tours and expeditions, choosing instead to partner with an operator, he said changes would have a significant impact on his business.

“I get people who come up and stay with me because they want to ice fish. For a lot of people, that’s their main reason for coming here. If that goes away, what am I going to do in the winter? How do I replace that revenue?” Cameron Ferguson is the operations manager at Haliburton Forest and Wild Life Reserve. He said he was initially made aware of the possible changes last year.

If passed, it would have a significant impact on business, Ferguson said. Haliburton Forest partners with Yours Outdoors for ice fishing.

Spokesman Barrie Martin said he sold 27 guided ice fishing experiences in the Forest last winter, and was hoping to increase this year.

He said if people can’t fish on certain lakes in Haliburton Forest, he would see a big drop in sales.

Thinking about the environment

When he took ownership of the resort in August 2007, ice fishing was a big money maker. He has steadily built the operation, with his most successful year in 2019, bringing in more than $100,000 between January and mid-March.

This year, from that same period, he brought in $4,180. “I am not making money on ice fishing anymore. I am losing money,” Halasah said. He said anglers have boycotted the lake because of its low fish population.

He believes the MNRF is doing the right thing, implementing legislation and giving lakes time to repopulate naturally. “Twelve Mile Lake is dead right now… I haven’t seen trout for the past three years,” Halasah said.

“Whatever the environment needs, we must help. Otherwise, the next generation is not going to be able to enjoy what we have had for the last few decades.”

Comments on the draft FMZ 15 fisheries management plan can be made at ero.ontario.ca/ notice/019-5715.