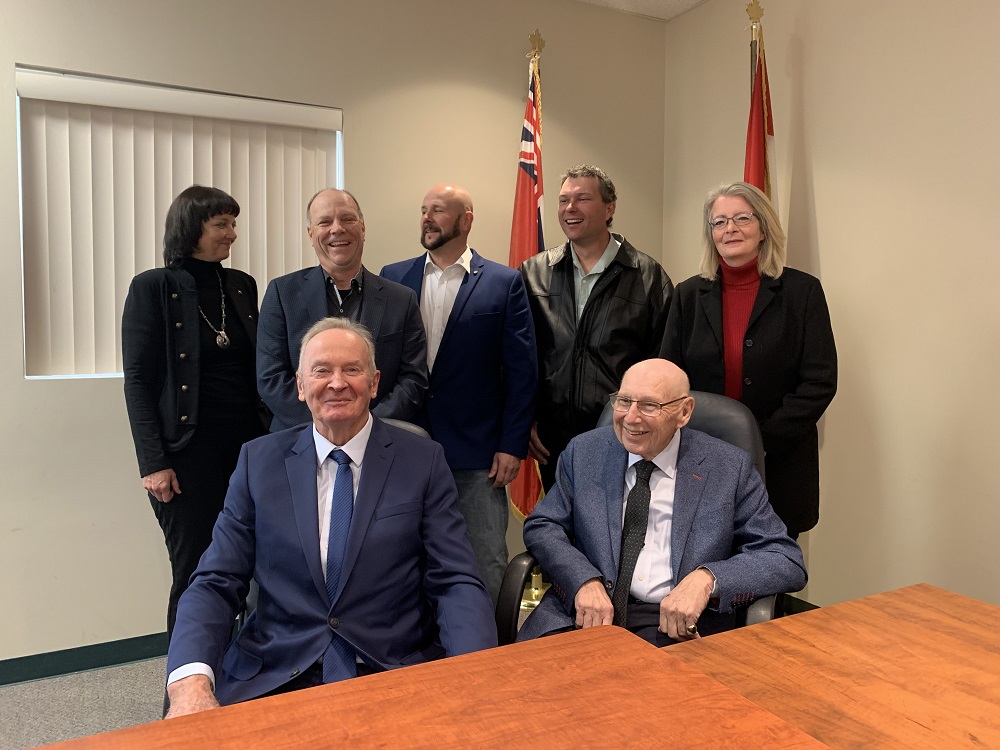 Just minutes after being sworn in as Dysart et al’s new mayor, Murray Fearrey said he was confident the community’s housing issue “will get solved” during this new term.

Fearrey has returned to the big seat on council, replacing Andrea Roberts, after four years away. He previously served as mayor in Dysart et al for more than 40 years.

Walt McKechnie will serve as deputy mayor, after three terms as ward 5 representative. Also back is Tammy Donaldson, serving ward 3, and Nancy Wood-Roberts, who will represent ward 2.

There are three fresh faces on council this term – Pat Casey in ward 1, Carm Sawyer in ward 4 and Barry Boice in ward 5.

Pastor Bev Hicks from Northland Faith Church was on hand for the invocation, offering a piece of advice to the community’s newly-elected representatives.

“We’ve all lived long enough to know it’s impossible to make everyone happy. You can’t walk the middle of the road… I’ll never forget a statement Murray told me when I moved up here. He said if everybody is happy, we must be doing something wrong,” Hicks said. “Criticism is a part of life. It’s how we handle the criticism that’s important.

Addressing the rest of council, Fearrey said there are many issues that require attention over the next four years.

“It doesn’t matter where you look, we’ve got trouble. Whether it’s staffing shortages; we’ve got several projects that have been started but not yet finalized; we desperately need recreation facilities; and we’ve got a huge issue with health care. If you don’t have health care, it’s hard to attract people to come here,” he said.

Fearrey feels council needs to adopt a new vision, mapping out a plan for where Dysart should be 20 years from now. He said there are many areas in the township that need to be improved, including the downtown.

“I’ve always felt the town of Haliburton is the focal point of this municipality. When people come here and the town doesn’t look good, doesn’t have any character, there’s grass on the sidewalks and the curbs are torn to pieces. I don’t think that creates an image people want to see. I’m not proud to see it that way,” he said.

“We have a lot of work to do. We’ve got a lot of people hurting in our community. I’m confident we’ve got the people here to move us forward. We just have to take our time and make decisions that are good for all of us.”