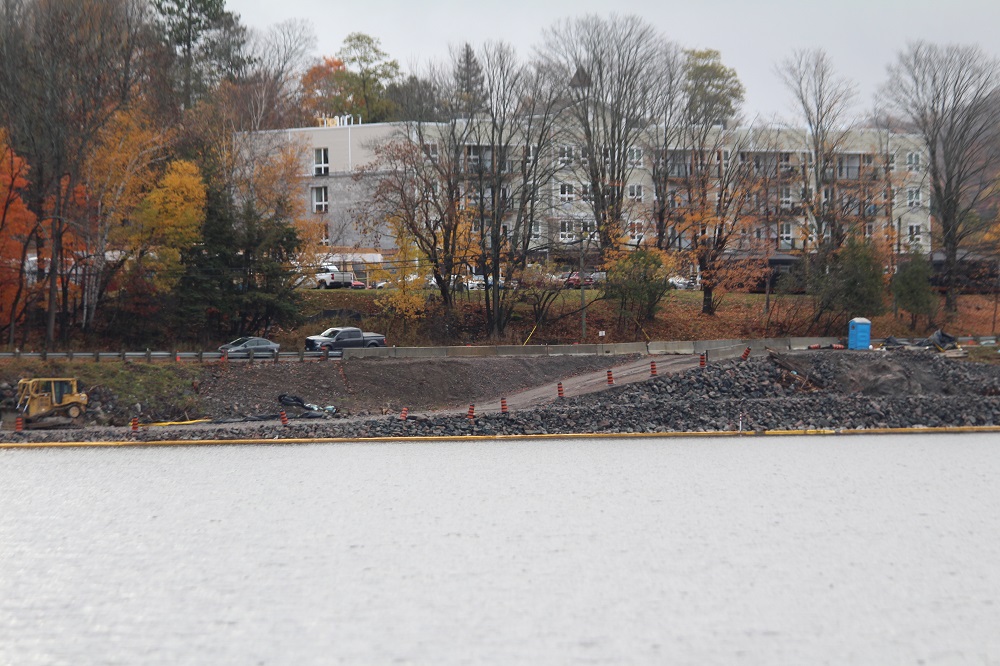 Work to repair a portion of Hwy. 118 in Haliburton won’t be complete until fall 2023, according to Ministry of Transportation (MTO) officials.

The project, which began in July, is focused on restabilizing the roadway in front of the Gardens of Haliburton residence. MTO spokesperson Dakota Brasier said work is progressing and will continue throughout winter.

There was some concern locally when workers contracted to complete the job removed trees and installed a temporary roadway between Hwy. 118 and the Head Lake shoreline. Brasier said workers needed to create a safe access way to the slope to install a benched rock slope, which she said will ensure the future viability of the road.

“This was all necessary to stabilize the highway. The benching will become a permanent part of the final slope stabilization. The stabilized slope is constructed of rock fill, which will control erosion,” she said.

The temporary roadway will be removed once construction is complete. Brasier said trees will not be replanted in the area.

There will also be a new permanent 1.5-metre-wide extended curb installed along the highway, connecting to an existing pedestrian walkway that runs up Hwy. 118 and around to Maple Avenue.

“I think it would be really nice to have a bit of a boardwalk there around the lake,” Kennedy said. “You couldn’t walk on it right now, something else would have to be done for it to be usable. It would be a project Dysart would have to take on, something for a future council to consider… but there would be grants available [from the federal and provincial governments] that could fund the project.”

He’d like to see that strip eventually connect to the rest of Dysart’s trail system surrounding Head Lake.

Anyone who has travelled south along Hwy. 35 over the past two years has had to contend with extensive roadworks at Miners Bay and Moore Falls. According to Brasier, both of those projects will be completed this year.

“The work at Miners Bay includes rehabilitation and replacement of an existing concrete culvert, together with accompanying retaining walls. The entirety of the culvert length was waterproofed and existing guiderail was replaced. New pedestrian handrails were installed on the retaining walls and permanent erosion protection is included on the downstream slopes of the creek,” she said.

Miners Bay Road, closed on one end to Hwy. 35 for the duration of the project, has been open since early September.

Construction along the bridge at Moore Falls has been extensive, and includes deck and bearing replacements, waterproofing, paving of the new bridge decks and installation of a new sidewalk, barrier walls and guiderail. Work has been ongoing since 2020.