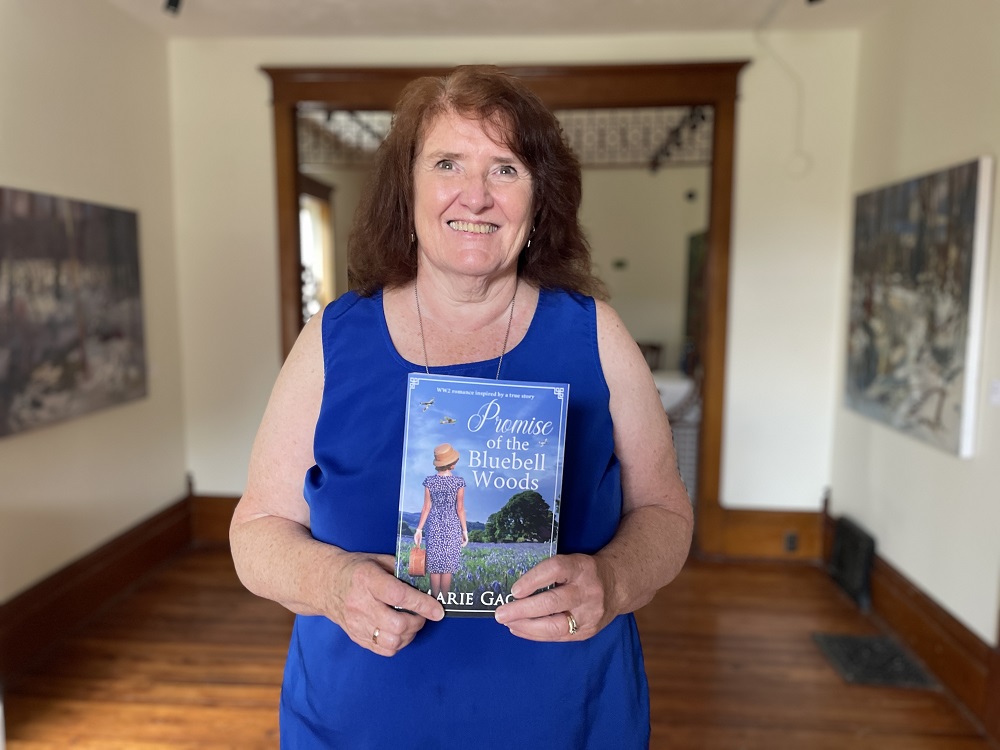 Marie Gage has a nose for a good story. An intriguing whiff of her in-laws’ past inspired her latest novel, Promise of the Bluebell Woods.

It’s a story about Rod, a Canadian laboratory technician stationed in England, and Pearl, an English woman who’s contributing to the war effort through her work in a factory.

It’s a story about their love, but it’s also a dive into a unique slice of war history.

“I didn’t understand the contribution Canada made in a medical sense to the Second World War,” Gage said.

The novel unravels the pair’s story with fact mingling with fiction.

“I have this need to know the answer to the unanswered questions. I think that’s the researcher in me… there’s no way with a non-famous person like members of my family would I find the actual fact. I’m driven to resolve it in my own mind by making up a story. I think the stories work for other people and they’re grounded in reality as well.”

She said she was drawn to their love story because of how it shows the small ways people sacrificed for the war effort.

The pair met at a dance in Watford, a suburb of London.

“The romance is the same way my motherin-law told it when I interviewed her,” Gage said. Pearl was at a dance “fulfilling her civic duty,” said Gage, to help provide entertainment to the men stationed in the town. They hit it off, but it was only when they were later separated and Rod deployed that they realized the extent of their feelings.

In some sections of the novel, Gage details the work of a laboratory technician and what medical life on the front lines was like. “It was really hard to be sure that I was getting that right. There wasn’t a training program for lab techs at that time,” she said.

Gage’s passion for spinning stories from family lore first hit the page in her first novel, A Ring of Promises. It was inspired by her grandfather’s journal.

It told a story of a canoe trip, and upon deeper inspection, it emerged he undertook an epic canoe trip to Port Nelson on Hudson Bay, a ghost town.

“Grandpa had actually travelled a fur trading route from Hudson Bay to Winnipeg, trying to escape the company.”

She wanted to know more: why was he driven to flee? How did he make the trip?

“How do I verify these things?” said Gage.

“I started looking at our family and more deeply at artifacts. That ignited my passion for these stories.”

Harp in the Dark Chapter 7: Heartbeat