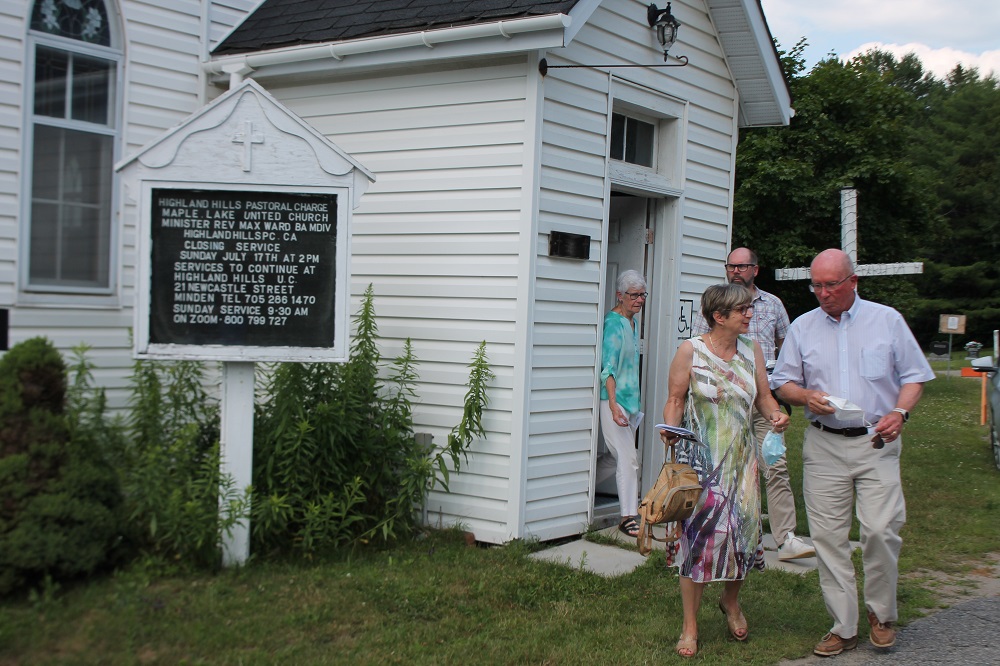 A table at the front of Maple Lake United Church held symbols of 121 years of faith as the congregation bid farewell July 17 to the little church at the corner of Hwy. 118 and Stanhope Airport Road.

Worship leader Debbie Sherwin referenced the baptismal font, communion table, pulpit and worship space marking, “the countless services… and sacraments celebrated in this place, and to bring to mind the ministers and lay minsters who have led worship.”

Council chair Larry Giles placed his hand on a front pew as a reminder of “the congregations who have gathered over the years for Sunday services, baptisms, funerals, weddings, and other celebrations that have taken place.”

There were crafts, pictures, curriculum books, CDs and Christmas pageant clothes honouring, “hundreds of students who began their Christian journeys in the place,” according to Christena Barry.

A hymnbook and choir gown spoke to the music ministry, Deloris Bailey noted. Looking on was Kathleen Owens, the church’s organist for more than 60 years.

And a hammer, drills bits, and handsaw were representative of those who toiled to maintain the building, Albert Carpenter said.

Rev. Max Ward kicked off of a more informal trip down memory lane when he shared how the congregation used to gather downstairs, since it was easier to heat, for a potluck supper followed by song. At the time his daughter was an infant. She is now 18. He recalled how when they sang the hymn Bringing in the Sheaves, she thought the words were bringing in the cheese.

Ward said the church had not only had an impact on Stanhope, but the country and indeed the world through its ministry. He acknowledged the congregation’s “swirl of emotions.”

A congregation member since childhood, Delores Sawyer Bailey, recollected the annual summer trip to the cottage.

Driving from the GTA with her family, she and her siblings would look for the familiar landmarks on the drive. The last was “the little white church” on the corner as they made their way to her grandparents’ farm.

She first went inside the church when she was eight for Grandma Sawyer’s funeral. When she was 10, her parents moved to Maple Lake. And while her mom and dad didn’t attend church, she went to Sunday school.

“As I sit in the pew on Sundays, I think of all the families, past and present, who have contributed to building and maintaining Maple Lake United Church. It was important for them to have a place to worship. It probably never crossed their minds that 100 years later their descendants would be worshiping in the same place.

“If the walls could talk, I would love to hear of the baptisms, weddings, and funerals that have taken place over the years, as well as the celebrations of Christmas and Easter.”

Commenting on the closing, she added, “like our ancestors, who worked so hard to build this church, they never knew how the story would end, but they had faith. Only God knows the beginning and the end of every story. Here we are 121 years later, and like our ancestors, we must put our faith in God and remember the many Bible teachings we learned in the little white church on the corner at Maple Lake. “

Sherwin told the full church on a hot summer’s afternoon, “We come together with so many good and treasured memories, but with a strong sense of grief at saying farewell to this hallowed place. We come together, also, with great hope for continuing our life of faith at Highlands Hills United Church in Minden.”

Burned out family focuses on the positive