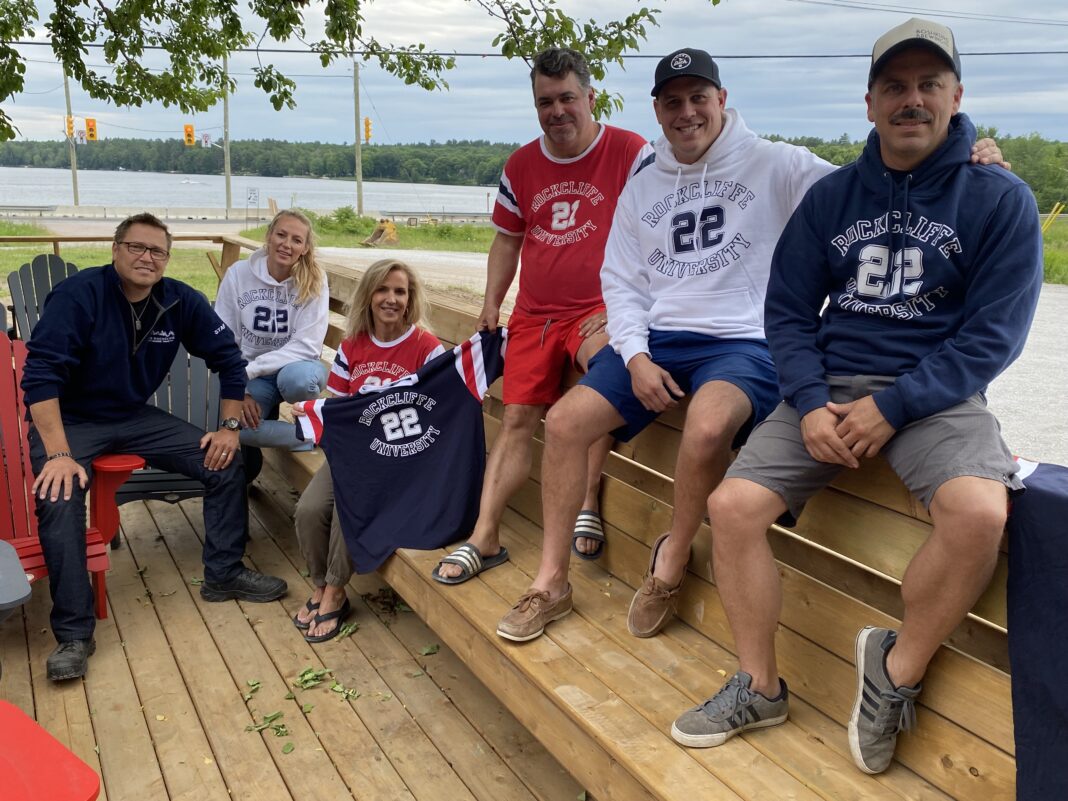 Years after the original bar in downtown Minden closed, the Rockcliffe brand is growing under fresh ownership with the opening of a new restaurant overlooking Moore Lake.

Friends Dan Gosselin, Jono McMahon, Kirsty Goodearle and Mark and Lise Dracup took over the old Summerkiss seasonal restaurant in Moore Falls last November and have spent the past six months restoring the original building and giving it a major facelift to recreate the charm and feel of The Rockcliffe.

The new restaurant will open with a special celebration on Canada Day.

“We’re just really excited to be here… We’ve all been regulars at this restaurant over the years, and when we found out the owner was looking to sell, I think we all felt the same way in that we didn’t want to lose the place we had come to love,” Goodearle said.

The inside space has been completely renovated, with a new bar installed. The site also boasts six hotel rooms, which will be available to rent as of July 1. Unlike the old location, Rockcliffe Moore Falls will be open year-round.

The team was excited to recently welcome chef Eric Percy into the fold. He has taken the lead on building a new menu from scratch, inspired by local favourites and specialties he has perfected from his 20 years working in fine dining establishments in Toronto and all over the world.

“We’ll have a little bit of main street and a little bit of high street on our menu. If you want fish and chips, chicken wings or a hamburger, we’ve got you covered. If you want a porterhouse steak, we have you covered there too. There will be something for everyone,” Percy said. “Everything is going to be made daily from scratch. We’re not going to do your usual out-of-the-box, frozen food here. Our food will be made in-house with love by our skilled team.”

Percy noted there will also be various vegetarian and vegan options on the menu.

Living and growing up in nearby Fenelon Falls, Percy remembers the heyday of the original Rockcliffe.

“We’re thinking this will be the launchpad for the rebirth of The Rockcliffe,” he said.

Updates on the rebuild of the downtown Minden site are scarce – Dracup said all pertinent applications were submitted to Minden Hills last year, but things are at a standstill.

Their immediate focus right now will be on establishing the new Moore Falls location. Gosselin said he has big plans for the site.

“We definitely see this as being a big music venue – we want to have live music every weekend… And given we have seven acres of land here, that might let us look into hosting outside events and things like weddings,” he said.

McMahon added, “It would be cool to have things like horseshoes, bocce ball. We’ve talked about doing outdoor volleyball and getting a league going. Then in the winter we want to build a rink for the community too.”

And, most importantly, a key piece of The Rockcliffe’s history is returning too.

“We’ve got the old Rockcliffe University shirts printed and ready to go. People can buy them right from the restaurant,” Dracup said. “That’s such an important piece for us. The Rockcliffe is so iconic and has such a storied history in Minden, and these shirts were a big part of that. They were a very successful part of the business… There have been times when I’ve been away on vacation, at Disney, and I’ve seen people wearing those Rockcliffe shirts. We had to bring them back.”