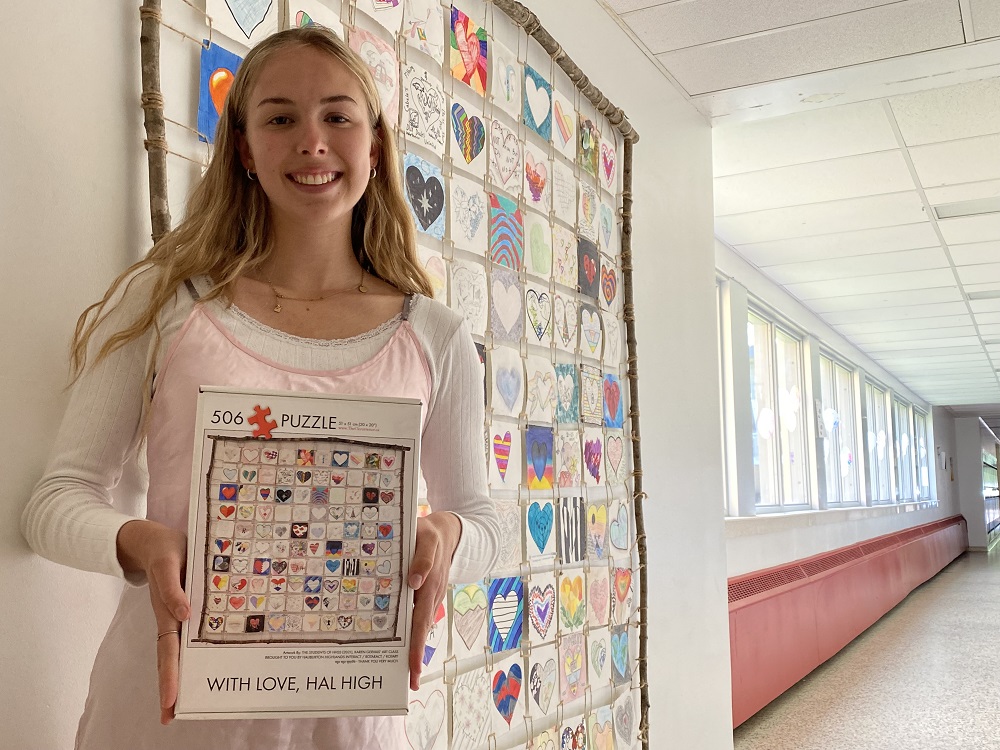 A group of local high schoolers are sending love from Hal High all the way across the world.

The HHSS Interact club is working on its annual international fundraising campaign, collecting money for the Mahatma Gandhi Sishu Siksha Sadan School in northern India. The Highlands group has fostered a partnership with the institution for several years, providing money to support the infrastructure of the school and purchase much-needed supplies.

In 2021, through sales of its From the Heart of Haliburton cook book, the Interact club sent approximately $3,500 to the school, located 200 kilometres north of New Delhi. This year, they’re hoping to go one step further.

Interact has developed a pair of puzzles, which they’re selling to the community for $35 each. One is a depiction of a mural located at the school, titled ‘With Love, Hal High’, while the other is a picture of a lake in Haliburton County appropriately named ‘Morning Reflections’.

After selling 50 puzzles already, the club has put in a second order to receive another 100. The fundraiser will run throughout the summer, with a goal of raising in excess of $5,000.

“Every year we do something a little different, but we’ve found that it’s worked well making things that we can then sell to the community,” said Sophie Longo, a Grade 11 student at HHSS and Interact club member. “We’re really happy with how this fundraiser has started. We just want to send as much money as we can to school, because they really need it.”

Built in 2003, the Indian school has grown from having 65 students in its first year to more than 500 today. As well as academics, students are taught yoga, while they also receive a daily meal.

Longo said it’s initiatives like this that sparked her interest in joining Interact.

“Just wanting to do a little good, give back to the world where I can,” Longo said. “We have supported so many great causes [in the two years I’ve been involved] … It can be hard planning sometimes, but once you see things unfold, how our members interact with one another and the community, it’s really nice to know that the work pays off.”

The club has completed several projects during this school year. Over the holidays they ran a shoebox drive, providing gifts to underprivileged teens for Christmas. Recently, they held a week-long fundraiser for Ukraine, raising $3,000.