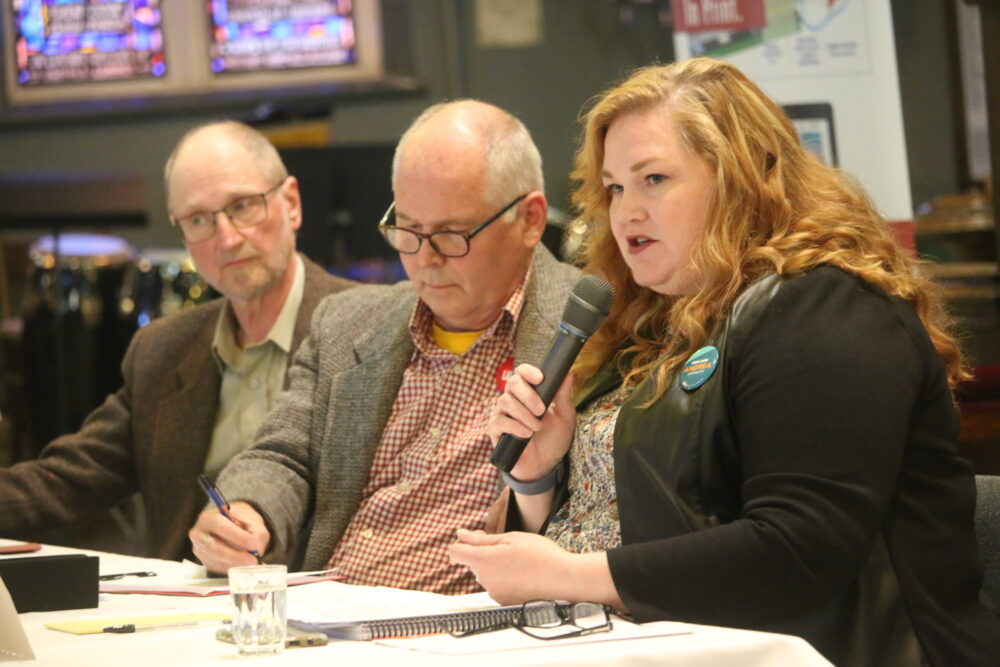 A group of around 50 people were on hand at the Cambridge Street United Church in Lindsay May 17 as three of the candidates vying for provincial office duked it out in an election debate hosted by The Lindsay Advocate.

While invited, PC candidate Laurie Scott, seeking a sixth term in office, was not in attendance. Others whose names will be on the ballot June 2, including Libertarian Gene Balfour, the New Blue’s Ben Prentice, Ontario Party rep Kerstin Kelly and Grant Dewar of the None of the Above Party were not invited to participate.

Each candidate was given two minutes to introduce themselves and their platforms, before they were asked to respond to a series of prepared questions posed by guest panelists. Regina was up first, stating that affordability has become “the central issue at the heart of all other issues competing for our attention”.

He laid the blame at the feet of the Conservatives, Liberals and NDPs who he claims, over the course of 30 years, have failed to prepare for a changing population and economy.

“Over the last 30 years, government has been keen to turn students and patients into clients, keen to allow private business to provide housing, education and health care to make better use of taxpayer money. The result is the mess that is at our doorstep,” Regina said.

McBey focused his speech on the misgivings of Premier Doug Ford, criticizing the recent 2022 budget as a document that nobody can afford. “He’s going to spend and put us $200 billion into debt… Never has any government spent so much money giving so little to so many people,” McBey said.

Doyle said the upcoming election is the most important one in her lifetime and that “after four years of incredible hardship” under the Ford government, the NDPs have a plan to fix what has been broken.

The first question, submitted by Matthew Robins, centred on the housing situation, asking candidates what their party will do to make rental properties reasonably priced for those who can’t buy a home. It was stated that even a starter rental in the riding today rents for anywhere between $1,400 and $1,800 a month.

Doyle said the NDPs would build 3,000 new units in the City of Kawartha Lakes alone to offset pressures, while McBey said the Liberals would reinstate rent control.

Regina said the Greens would work with housing cooperatives and non-profit corporations to build “deeply affordable” homes for those most in need.

Responding to a question about climate change; phasing out gas-fired power plants in Ontario and speeding up the transition to electric vehicles, all three candidates said this would be on the radar of their respective parties should they get into office.

They each said they would implement rebate programs for Ontarians that purchase EVs. After Heather Kirby, executive director of the Kawartha Lakes Food Source, asked about further supports for those living in poverty, Regina said the Greens would immediately double ODSP payments, something Doyle said the NDPs would match by 2024.

McBey said the Liberals would scrap the proposed Hwy. 413 project and use some of the $10 billion earmarked to eliminate HST on prepared foods, while upping minimum wage to $20 an hour over the next four years.

Each candidate spoke of their personal desire to outlaw for-profit long-term care companies from operating in Ontario when asked how they would ensure a crisis like the one that hit the sector during the COVID-19 pandemic doesn’t repeat itself.

“We know that the best outcomes were in municipally-run homes… We know that taking the profit out works, we know that putting all the money back into patient care and good staffing levels works. Being prepared with PPE and suitable supplies,” Doyle said.

“What doesn’t work is taking money out of healthcare and putting it into the pockets of wealthy corporations… The NDPs will put a stop to that.”

Committee says ‘no’ to marijuana festival