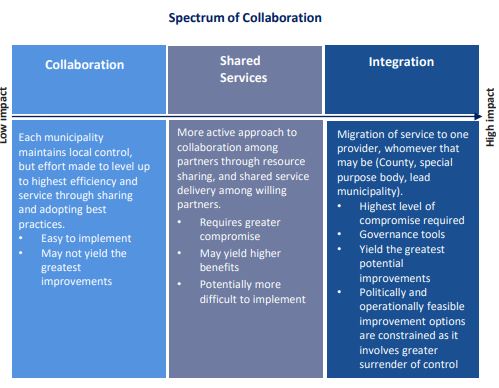 David Siegel is a retired professor of political science at Brock University who has researched and written extensively about amalgamations in Ontario.
He thinks the County is on the right track with its service delivery review. For example, one recommendation by consultant Strategy Corp. is to hire a procurement specialist to help the municipalities achieve savings through strategic and collaborative sourcing.
“This idea of getting into a partnership, of things like procurement for example, that’s an obvious one and that’s a place where a lot of places start because it is pretty straightforward because now you have increased buying power,” he said.
He noted that in Niagara they have a paper partnership where municipalities, along with school boards and universities, purchase things such as stationary, toilet paper and paper towels together to save money.
“There are some forms of partnerships that can go beyond municipalities.” Siegel said something such as procurement is “also a place to get your feet wet and figure out whether this marriage is going to work.”
He said recommendations such as the new economic development and tourism director and creating an in-house legal position as well as a communications officer and grant writer make sense as five townships can contribute towards the cost.
They would not have been able to manage on their own. “It seems to me your best route in the short-term is some form of sharing agreements.” He said he thinks it is a more logical progression as opposed to amalgamating and then working backwards.
“Once you start getting into these joint service agreements, then the next step could potentially be amalgamation because if these things work then at some point someone is going to say ‘why do we have these four different shells when so much work is being done on a joint service basis. “And, if that’s the way it goes, then that will make the amalgamation much easier probably because there’s usually a lot of blood spilled with these amalgamations over the idea of giving up this autonomy, but if you approach this thing gradually – which it seems like you guys [the County] are, then that becomes a much easier thing to sell, and a much easier thing to deal with.”
Asked for examples of what comparator municipalities have done, Siegel said he could not since every municipality in Ontario is different. However, he pointed to northern York Region as an example. “The northern municipalities up there, they started a number of years ago with a partnership agreement. And they just keep expanding. They get new ideas about things because the mayors and CAOs get together on a regular basis.”
He said, “you might be searching in vain for a municipality that looks like Haliburton County. You will find pieces, such as purchasing agreements in northern York regions but sometimes municipalities just have to strike out on their own. “I think people are looking for a final answer to what Haliburton is going to look like forever and a day, and that’s not going to happen.”

Margaret Quick is the mayor of Georgina. Since 2005, her township has been working with Aurora, East Gwillimbury, King, Newmarket and Whitchurch-Stouffville on collaborative initiatives and partnerships. It’s known as the Northern Six Municipalities (N6). The N6 was profiled at the 2018 Ontario Municipal Administrator’s Association annual conference and the Federation of Canadian Municipalities summer 2018 session.
It’s received national recognition. Some of the collaborations have included waste collection, resulting in $11 million in savings, and allowing each municipality to double its waste diversion rates.
They’ve also partnered on year-end auditing, garnering a 10 per cent discount. Some of the six have partnered on a fire master plan, saving 40 per cent of costs. They’re now looking into emergency services and waste and wastewater. They saved another $750,000 in 2011 on a joint procurement for an insurance provider.
There are mutual staff training costs; joint animal control services; looking into potential collaboration to further develop and implement corporate asset management programs and combined external legal services, IT, and fleet.
They’ve done procurement together for years. Quick said although Haliburton County is smaller, “I don’t see why it couldn’t or wouldn’t” work here. “Whether it’s a small scale, working together on joint projects and service delivery makes sense.”
She said they don’t all always join.
“Sometimes it’s N4, N3 N2 hybrid models. If it doesn’t work for a community, they can opt out.” However, “if you don’t look at something, you don’t know if it’s going to work or not, so there’s no harm in looking at it.”
She said in the early days, there were some attachments, for example, to longterm contractors so, “it can be difficult to look at, but when you do, it can, from a business model point of view, if it makes sense, it can save taxpayer dollars and provide a more efficient service, or a larger service or a more in-depth service.”
Her advice to Haliburton County? “Be open to it. Put things on the table and see what works. And if it doesn’t work for everybody, that’s fine. But don’t be afraid of looking at it. Change is that big scary thing and sometimes you need to embrace change. You don’t just change for the sake of change but if you can find a way to deliver a service more efficiently, perhaps a higher level of service than you had before at an equal or better price, why shouldn’t you look at that?”
She said the question of possibly amalgamating some northern councils came up a couple of years ago, but “bigger isn’t always necessarily better. There are other options such as partnering together that bring efficiencies while allowing the individual character of communities to continue.”

In March, the first N6 type agreement was forged in Haliburton County with all four townships agreeing to a joint household hazardous waste co-operative. Not only did they do a joint tender, to check off the efficiency box, but they also improved customer service. As long as you have a landfill card, you can now take your household hazardous waste to any of the 14 events being held across the County. County Coun. Andrea Roberts said, “that kind of communication might not have happened before if we hadn’t done a service delivery review. I just think this is a great example of the local municipalities working well together.”
Coun. Brent Devolin said there had been some historic collaborations, such as Minden Hills and Highlands East sharing some landfill services, but “I’d love to see more of those across the County.”

Behind the scenes with Haliburton’s vaccine volunteers

Those Other Movies returning to Highlands