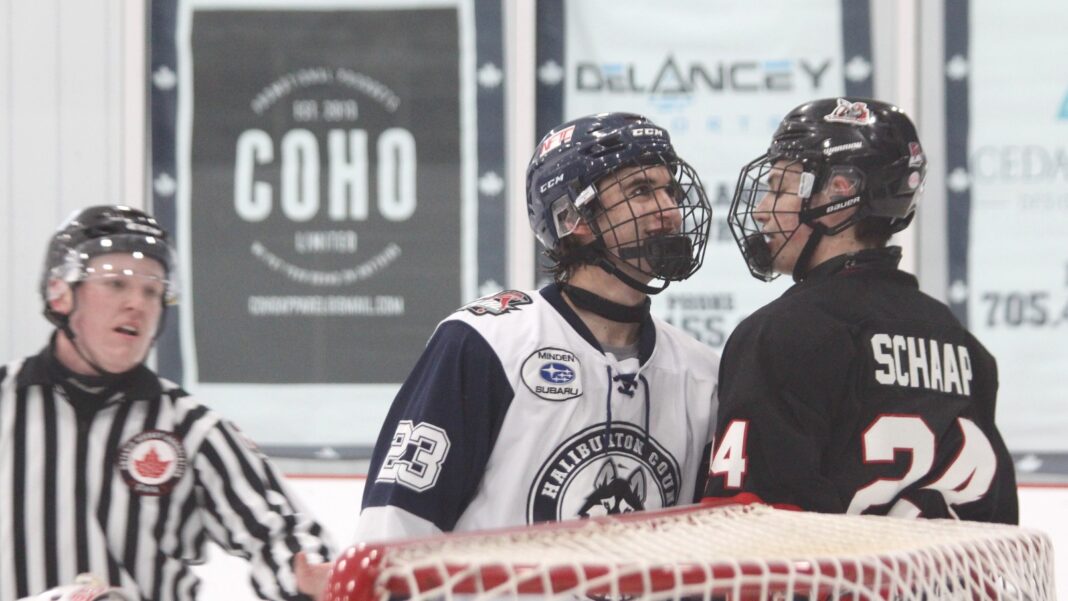 Huskies head coach Ryan Ramsay said the team might have struggled to maintain focus as they battled the Mississauga Chargers to a 6-3 victory April 2 on the last weekend of regular-season play.

“I think we were a little bit off today. Sometimes when you have the light of playoffs you kind of get mesmerized by who you’re going to play in the playoffs. You’re not thinking about who you’re playing day-to-day,” Ramsay said.

He praised the Chargers’ passionate performance. “Their boys played hard today and they got a lot of quality shots. They’re not making the playoffs but they didn’t quit. They’re playing for their careers and for next year,” he said.

The Chargers scored first before the Huskies’ Bryce Richardson thundered up the rink to slot home a shot assisted by Oliver Tarr, and Will Gourgouvelis.

After that, the Dogs crowded the Chargers half of the rink, with multiple shots on net, the closest being a Joe Boice effort which flew just a hair wide of an undefended net. The Huskies’ fast-moving play was sparked by Patrick Saini, who was later named first star of the game.

The plucky forward brought precision to the Dog’s attack, showcased by one-two play with Simon Rose and a pass across the net to Noah Van Vliet who scored his first OJHL goal to put Haliburton in front.

The teams exchanged goals until Saini put them ahead once more, assisted by Isaac Sooklal and Christian Stevens.

Rose, who quickly has become an anchor on the Dog’s backline, joined the party with a precise shot from distance assisted by Tarr and Sooklal.

Saini capped off his immense performance with a shorthand goal, with Sooklal and Tarr once again providing support. Racing up the rink, he danced by two players before bulging the top of the net. Ramsay said the squad is in high spirits as they prepare to battle the best in the league in playoff action.

“The guys are excited obviously to get going. I guess you could call it the real season. We’re focused, we’re healthy right now too which is nice,” he said. “It’s going to be the best of three and it’s going to come quick so we have to be ready.”

The Huskies honoured graduating players and their families before the match. Christian Cicigoi, Rose, Tarr, Nathan Porter and Payton Schaly will be moving on from the squad next year.

The squad fell to Wellington on the road 3-2 as the hosts enjoyed a comeback victory April 4.

After a Wellington goal, the Huskies’ Gourgouvelis grabbed one back late in the first period, assisted by Sam Solarino and Nick Athanasakos. Athanasakos scored four minutes later to give the team an early lead.

However, a resurgent Wellington squad came level before finding a winner five minutes into the third period, ending the Huskies’ regular season with a loss.

Now, the team looks ahead to a playoff series with Trenton.

The first game is Sunday, April 10 in Trenton at 4:30 p.m., then Wednesday, April 13 at home at 7 p.m. If a third game is needed in the best of three series, the teams return to Trenton Thursday, April 14 at 7:30 p.m. Tickets for the home game are available now at Haliburton Foodland and Dollo‘s Foodland.

A rock education with Camexicanus

Tourism a mixed bag so far this summer