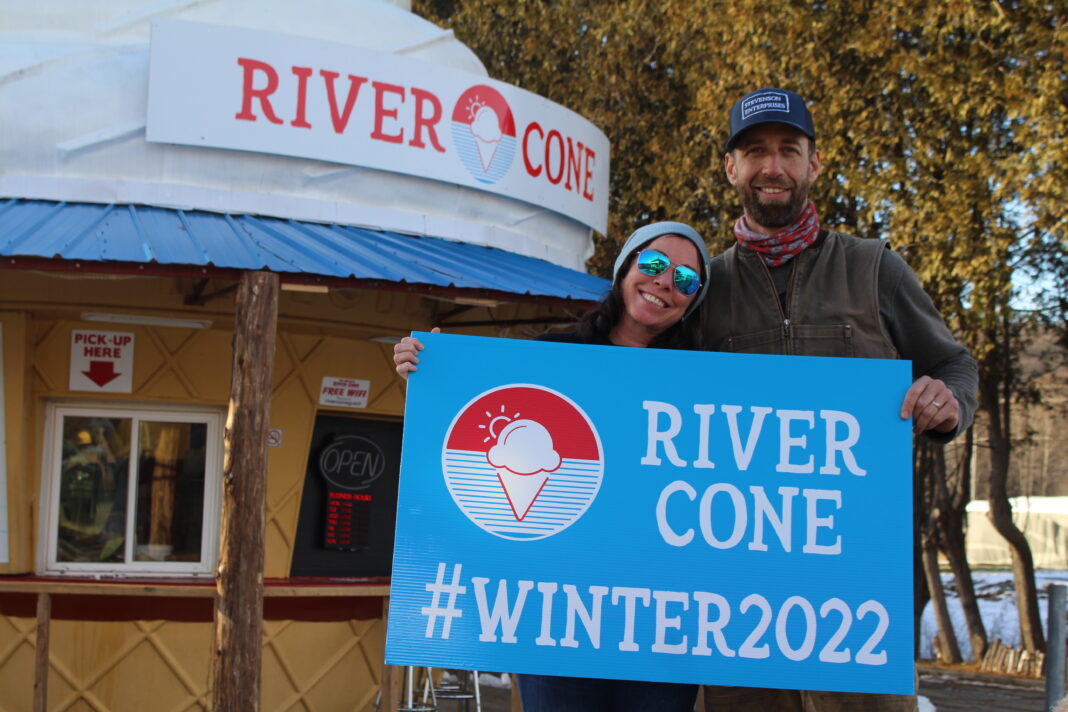 Instead, new owners Monica Bolton and Ben Scott have been hard at work crafting the Cone into a winter destination for locals, snowmobilers and perhaps even skaters.

They aim to open five days a week in January, a first for the location they’ve been operating since May 2021.

With a background in construction, Scott has been ensuring the fibreglass cone, traditionally just a summer spot, is ready to dish up quality meals in the cold. Scott said they’re excited to offer hearty meals like stews, soups or house-made mac and cheese, “things that really fill you up,” he said.

Bolton presented a vision for a River Cone skating rink at Minden Hills council Dec. 9. She said it could be a big draw for tourists who might hit the ice before grabbing a hot beverage at the River Cone or perusing downtown shops. “Taking a public space like this and offering added features; it’s quite a draw,” said Bolton.

While the rink wouldn’t be operational this year, the River Cone’s received broad support on social media and councillors seemed receptive to the project. “It sounds dreamy, frankly,” said deputy mayor Lisa Schell.

Mayor Brent Devolin called the idea “novel” but cautioned there are “nuts and bolts” associated with constructing and operating a rink on the area, which is an unused municipal road. Bolton and Scott said they’re excited to continue to explore how the project could proceed in future years. “I think this idea has some legs,” Bolton said and addressed the many who’ve voiced support for the project online “don’t lose patience or faith that we can work with the municipality so we can do something cool with these unused spaces.”

In the summer they strung up a pickleball net on the road, and local youth often play basketball there while hanging out around the eatery. “We feel really strongly about the need for kids, and youth especially, to have someplace they can go,” Scott said, “where they have freedom to be themselves but there are lots of eyes on them so they’re accountable for their actions or behavior.” Skating rink or not, Bolton and Scott said creating a community hub is a central value. “We enjoy that sort of vibe,” Bolton said.

EH! goes back to the land on climate

Highlands East calls for US border to stay closed