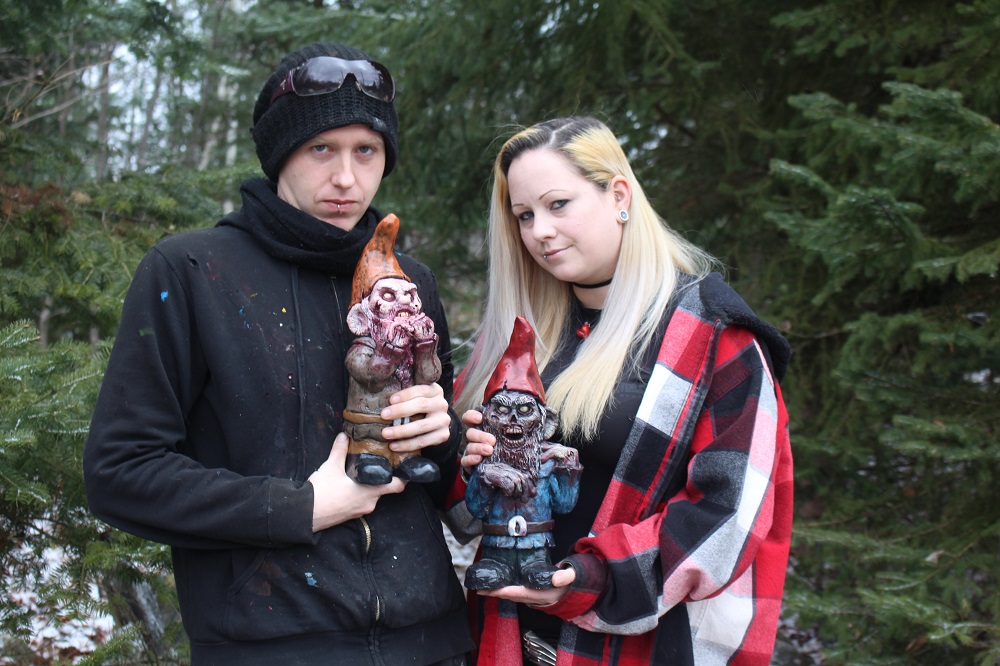 A pair of Highlands East artists are raising the alarm about an online shopping scam that’s stolen their shop’s identity and wasted countless hours of their time.

Sadie and Casper Revenant run RevenantFX from their home near Gooderham. They create hand-painted, horror-themed gnomes and other small statues.

In April 2021, they started receiving messages from fans asking about product listings on Amazon claiming to sell their products.

“We’d never seen anything like it before,” Casper said.

“I spent about three weeks reporting listings, just Amazon alone,” said Sadie. Often Amazon would take the listing down, just as another popped up.

They’ve joined an online “scambusters” group that helped them report hundreds of copyright infringements on listings.

Customers who purchased the fake products showed images of smaller, lighter and mass-produced gnomes and statues, poor plastic replicas of Casper’s painting and Sadie’s moulding skill. While RevenantFX has posted multiple blogs and social media posts cautioning buyers, many shops get angry customers who believe the original maker is to blame.

A quick search for “zombie gnome” on Amazon shows how widespread the scam is: even with constant reporting, multiple vendors on Amazon currently advertise Casper and Sadie’s work, even using their product images and stealing hundreds of Etsy reviews.

Amazon wrote that “Our efforts have ensured more than 99.9 per cent of all Amazon page views by our customers landed on pages that did not receive a notice of potential counterfeit infringement and more than 99 per cent of the reviews read by customers are authentic.”

Despite those claims, RevenantFX said they’ve suffered massive sale losses due to fake reviews helping siphon customers away from their legitimate Etsy page and website.

Those who buy the fake gnomes, or any fake product online, often must return the product before being eligible for a refund when purchasing through sites such as Amazon or Paypal. However, returning a package from Canada to a country such as Hong Kong can cost more than $60, more than the price of many goods ripped off of RevenantFX.

Previously, PayPal has declined to comment on the matter, which has become known as a “bait and switch” tactic.

Casper said he’s learned that the shops often target holidays such as Christmas.

“Whatever the season is coming up, you’re going to see the ads for that a little bit ahead of time,” said Casper.

The Canadian government’s anti-fraud centre warns buyers that the holidays, for scammers, “is a time of taking.” They caution buyers to research a seller before purchasing, or inputting the name into a web browser to see if warnings pop up.

“Just do your research,” said Sadie.

Often sellers such as RevenantFX have a robust social media presence with engaged audiences and their names visible.

Besides making sure buyers get their gnomes from the source, a long-term solution seems a long way off.

“You’d think there are things in place that would stop that, or somehow fight it, but no, it seems like nobody seems to care,” said Casper. For them, publicity is the first step in fighting the scam.

“The thing is to get the word out as much as we can. What we’ve seen is most of the stuff that’s going on is illegal in the first place but nothing can be done about it. Who do you call? Who goes after it?”

All eyes on new Haliburton optometrists