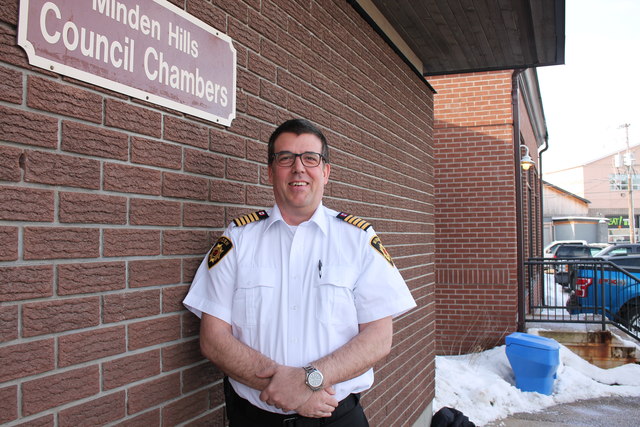 A hearing-impaired Minden man was able to safely escape his burning home this past weekend thanks to smoke alarms, fire Chief Nelson Johnson said.

Johnson said his fire department got a call to a Tennyson Road property at 12:30 a.m. Nov. 21.

The call from the 911 dispatcher said all occupants were out of the structure as volunteers headed to the scene.

Johnson said when the first crew arrived just before 1 a.m. they “encountered heavy smoke and flames. The roof was compromised and flames were spreading fast throughout the small, three-bedroom cottage.”

The department had an engine,water truck, rescue, two command units and 11 firefighters. The incident commander then called for mutual aid and the Dysart Fire Department brought two water trucks, a rescue, and 12 firefighters to assist. There was a total of 23 firefighters, one engine and three water trucks on site.

Johnson said crews began knocking down the fire and keeping it contained to the structure. The Minden Hills volunteers placed a portable pump in the lake to supply the engine with water.

“The occupant did not report any injuries, and the fire was considered out at 4 a.m.,” Johnson said. “The crews then switched to overhauling the fire to ensure that there were no hidden hot spots, leaving the scene at 5 a.m.

Johnson said no firefighters were injured either.

“The loss of a home can be difficult but we were very pleased that the smoke alarm functioned as it was supposed to and there were no injuries and the occupant was able to leave the building to call 911,” he added.

It was a busy weekend for the department. It had just finished extinguishing a large unattended brush fire when the structure fire call came in. Johnson said volunteers chocked up 37 hours of calls over Nov. 21 and 22. They included the structure fire, brush fire, a vehicle fire, medical calls, hydro lines down and the Minden Hills Santa Claus Parade.

Johnson emphasized how working smoke alarms save lives. He said if they are properly installed and maintained, they play a vital role in reducing fire deaths and injuries. He said other tips include:

·         Install smoke alarms in every sleeping room and outside each separate sleeping area.

·         Smoke alarms should be interconnected, when one sounds, they all sound.

·         Test your smoke alarms at least once a month, press the test button to be sure the alarm is  working.

Johnson said modern smoke alarms are more technologically-advanced to respond to a multitude of fire conditions, yet mitigate false alarms and there are many types and devices for people with hearing difficulties, young children and for other situations.

He added when you are looking at replacing or upgrading any smoke alarm, you should consider having alarms with strobe lights. The flashing lights can assist with hearing difficulties. If the hearing difficulty is extreme there are devises that shake the bed or vibrate when the alarm goes off. There are also smoke alarms that connect wirelessly through the internet to your phone, this provides instant notification to you, even if you are not home.

Youth encouraged to get vaccinated