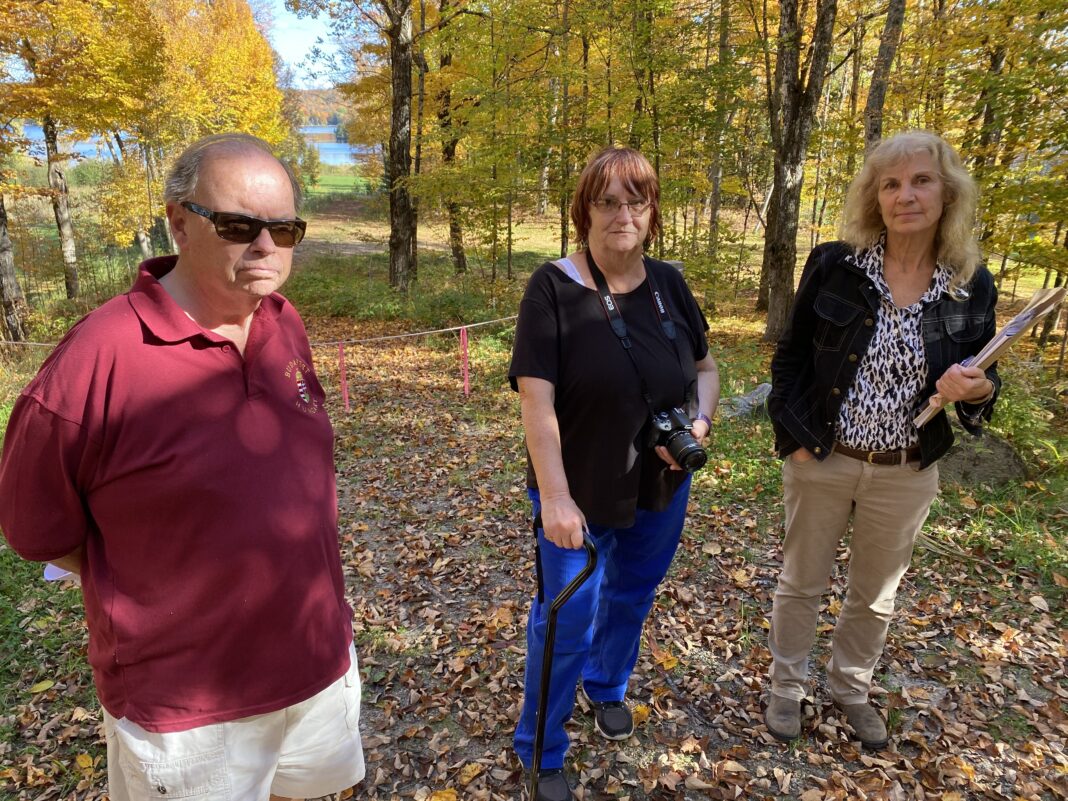 A proposed development that could see 88 new condominium units built along Peninsula Road has drawn the ire of residents, who believe the project will have a detrimental effect on the water quality in Grass Lake.

As reported by The Highlander in September, Harburn Holdings Ltd. has submitted an official plan and zoning bylaw amendment application to Dysart and a land severance request to Haliburton County, which calls for the development of around 8.3 hectares of vacant land on the west side of Grass Lake.

Initial plans include construction of two multi-residential buildings and one commercial unit. If approved, it would more than double the existing residential capacity of Grass Lake, which currently has 57 waterfront homes.

The lake also supports the Haliburton hospital and two commercial businesses. Carolyn Langdon and her family have lived in the area for more than 50 years. She said she was appalled when she learned about the plans. As she sought information, she connected with fellow residents, Don Ross and Lynda Williams. The trio has formed the Friends of Grass Lake, an environmental conservation organization.

“Our goal is to educate the public about what’s going on. We want to protect this land and, ultimately, protect Grass Lake,” Langdon said. The group’s chief concern is further development on the lake, particularly of this magnitude, could be “catastrophic” for long-term water quality and animal habitats.

Plans call for the removal of 50 per cent of trees, while some of the wetlands will be adapted to make way for walking paths and a floating dock. Langdon said it’s currently home to several rare aquatic plants, which help feed a significant fish habitat. There is also evidence to suggest that Blanding’s turtles, an endangered species, reside in the area.

Harburn’s planning consultant, Anthony Usher, wrote the township to indicate nothing in the proposal would “offend the habitat requirements” of the Blanding’s turtle as outlined by the Ministry of Environment, Conservation and Parks.

In addressing water quality concerns, Usher pointed to an extensive environmental impact study (EIS) and wetland site assessment, carried out last spring, endorsing the proposal. The report, conducted by Bracebridge-based Michalski Nielsen Associates, and a hydrogeological assessment of the land, are currently being peer reviewed by Dysart.

“My view of the EIS is … they have followed, from my experience, what are best practices. They have outlined a number of measures within their report to mitigate impact [on the lake]. Yes, trees will be cut further back, but the 30-metres [of wetlands along the shore] is going to be protected,” Usher said.

He added there are two things that can change water quality and lake health. One is an imperfect sewage system. However, he said the development will be on municipal sewage, “generally considered to be the gold standard today.” He said the other contributor is stormwater. “We didn’t do a detailed stormwater management study, to do that you have to have a detailed plan for the site, but the EIS addresses that and puts in a whole bunch of recommendations for mitigation of constructive impacts which [will be followed],” he said.

Ross claimed the land is “totally unrecognizable” from 2003, when Paul Wilson bought it. “I think the filling that has been done has already disturbed the habitat. I think if you put in people and asphalt and construction, the building footprints that are being proposed and the light pollution that comes with all of that, I think that will irreparably change the course of this habitat,” Ross said.

Jeff Iles, Dysart’s director of planning, said it was premature to comment on the proposal given the township is reviewing applicants’ reports.

He said there was no timetable for when this may be officially presented to council and the public. Usher said he doesn’t see any work beginning at the site for at least a couple of years.

Langdon is hoping it never comes.

She is wary of the precedent a development like this could set, not only in Dysart but across Haliburton County.

County could be one-stop shop for resources