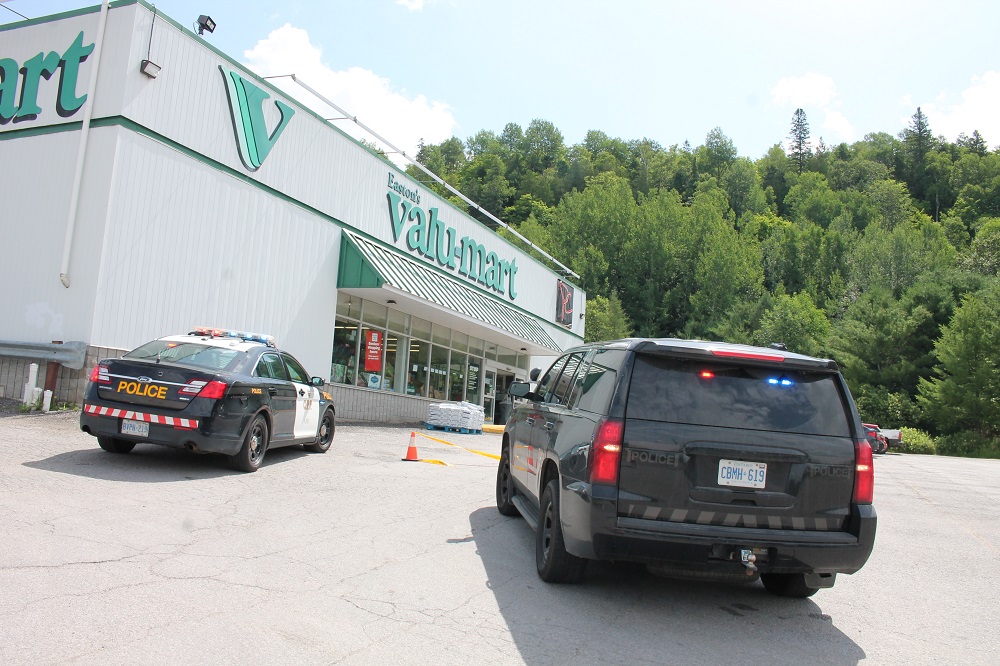 The Special Investigations Unit (SIU) has cleared two OPP officers after they shot and killed a Dysart man July 15, 2020.

SIU director Joseph Martino said in his investigation that a heavily-armed and camouflaged Leslie Hegedus, 73, hid in the bushes at his Indian Point Road property and fired at police first.

Martino said it was unclear which of Hegedus’ three gunshot wounds came from which officer but “there are no reasonable grounds to believe that either subject officer one or subject officer two acted other than lawfully throughout this incident. Accordingly, there is no basis for proceeding with criminal charges in this case, and the file is closed.”

Martino also said that the multiple rounds fired at Hegedus – nine by one and 19 by another officer – amounted to reasonable force.

“There can be little doubt that Mr. Hegedus was intent on killing police officers,” he said.

The incident began earlier that morning at the Valu-mart in Minden. Martino said Hegedus fought with and assaulted staff members over wearing a mask. He got into his vehicle and ran into other vehicles in the parking lot, struck the exterior of the store and several shopping carts.

He drove north on Highway 35 and then east on County Road 21. Police began a chase but called it off for safety reasons after Hegedus refused to pull over and tried to ram them.

They checked the car’s licence plate and found the black Alfa Romeo was registered to a property on Indian Point Road in Dysart.

Police were also warned to proceed with caution as there had been some weapons complaints from 2011 involving the registered owner of the vehicle.

Upon arrival, police saw fresh tire tracks going into the garage but did not see the suspect.

The investigator said Hegedus was wearing camouflage, had two guns, a ‘Ruger’ Mini 14 .223 caliber semiautomatic rifle and a ‘Browning’ .380 semi-automatic pistol and several boxes of ammunition in a knapsack, and was hiding in thick bush north of his residence.

The investigation revealed Hegedus fired his rifle twice at an officer, who was not struck but dove for cover. OPP then called for tactical backup. That’s when the two officer directly involved in the shooting arrived, armed with C8 rifles.

After firing at the suspect, they could see Hegedus lying behind a tree stump and heard him groaning. His rifle was laying partially across his lap.

They asked Hegedus to show his hands and radioed for an ambulance. After no response they went to do First Aid on the gunshot wounds. Paramedics arrived and took him to hospital where he was pronounced dead at 11:47 a.m.

Martino said that in his interviews with the subject officers, they told him they fired their weapons out of fear for their, and each other’s lives.

“I am confident that the officers returned fire believing it to be necessary to protect themselves from death or grievous bodily harm,” he said.

He added the two subject officers ordered him repeatedly to show his hands, he chose not to do so, “instead rising from a crouched position behind a tree stump and firing at subject officer number one.

“In that instant, the officers’ lives were in grave danger and they acted reasonably and proportionately, in my view, in resorting to lethal force of their own. Retreat or withdrawal were not realistic options in the moment.”

The SIU is a civilian law enforcement agency that investigates incidents involving police officers where there has been death, serious injury or allegations of sexual assault.

In cases where no reasonable grounds exist to criminally charge police, the director files a report with the Attorney General communicating the results of an investigation.