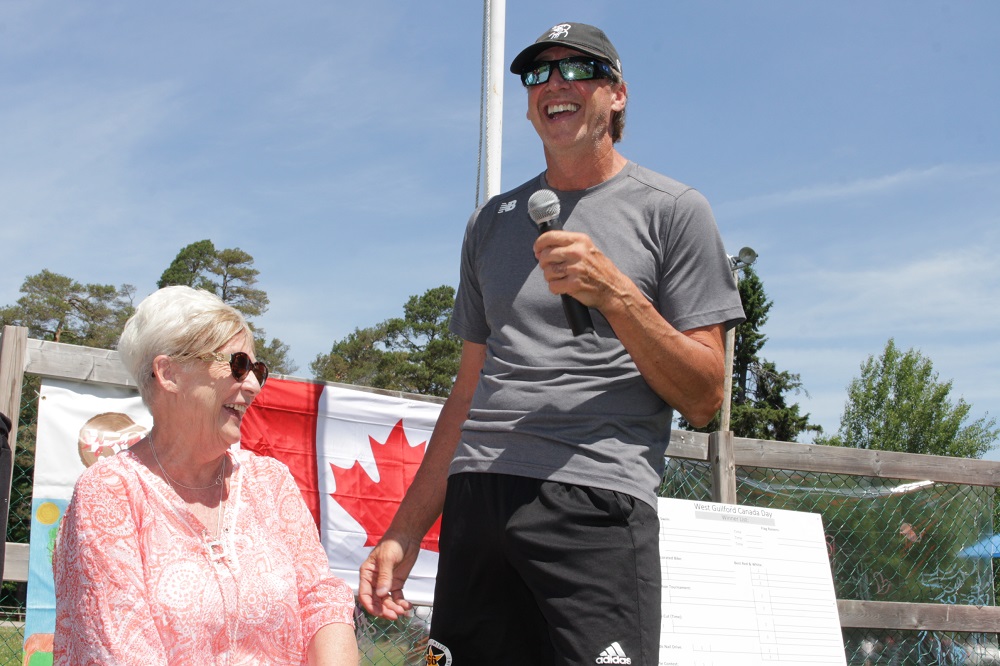 Bernie Nicholls said the icing on the cake of being named to the Haliburton Highlands Sports Hall of Fame is being inducted alongside his father, George Nicholls, who coached the Haliburton Junior D Huskies 1970-1971 powerhouse team.

“What I’m most proud of is my dad is going in too. There is nothing that I have ever done in my life that he was not a part of,” Nicholls told The Highlander.

He credits his dad with his start in hockey since the old man built an outdoor rink in West Guilford for Bernie and the other kids to play on.

Nicholls said his dad had an ability to put people into positions to succeed, in hockey and baseball.

“I don’t know anybody around here that did it any better … I am more excited about that and thrilled to death he is going in as well.”

Asked why he thought he had not been selected to the Hockey Hall of Fame – despite being one of the most prolific scorers in Los Angeles with Wayne Gretzky – he attributed it to playing on the west coast.

He said playing with Gretzky was like Christmas day, every day. He said it was fun and exciting and players wanted to play for him and not let him down.

He believes he was born with a gift for scoring goals thanks to an ability to read the ice and know what’s coming before it happens. “You can’t teach that. It is a gift I got and have had forever.”

He brought the Stanley Cup home to West Guildford after coaching with the Kings during their 2012 triumph. He treated that cup to all things Haliburton: going up a hunting tree stand, and cruising on the lake.

He said the coolest thing in sports is getting to have the Stanley Cup for the day.

Nicholls moved back to the County full time in September. The West Guilford Citizen of the Year in 2019, the hall committee said he is a credit to his family, his community and the game he loves.

As for the Hall itself and what it is doing, Nicholls in turn said it was “amazing.”

He’s come full circle from a four-year-old boy who began to skate on an outdoor rink behind the school in West G.

“It was cold. I remember skating there ‘til night time. My dad would have to come and get me to take me home. My feet would be frozen. We played with a pink rubber ball so we could find it when it went over the boards into the snow. Even when we were at school, at lunch time, we’d be going back and skating at the ice rink there,” Nicholls recalled.