Home News Updates County down to one vaccination centre 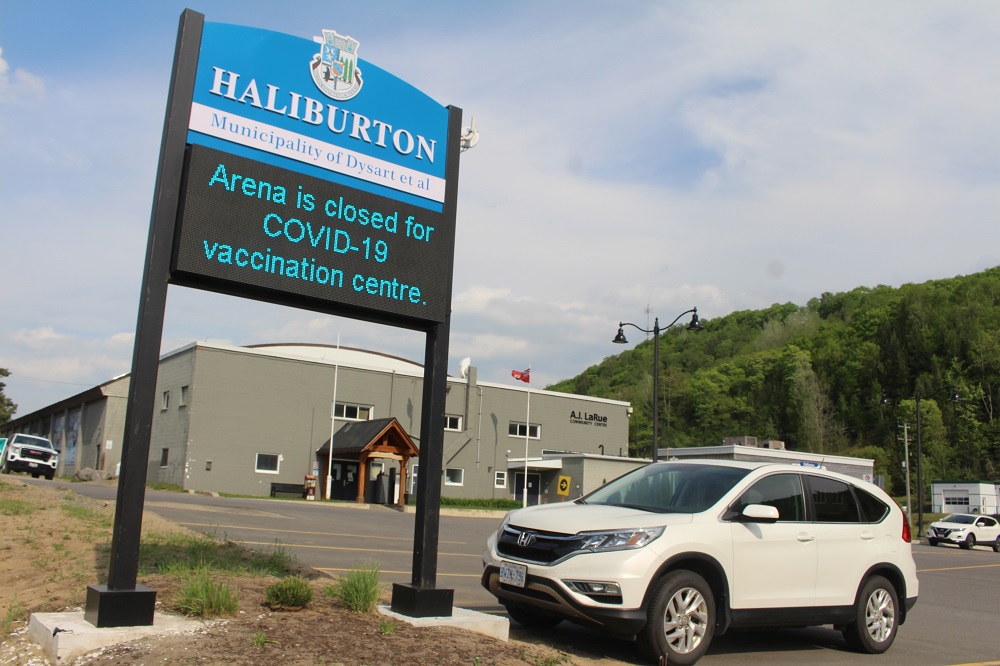 The Haliburton, Kawartha, Pine Ridge District Health Unit has decided that Haliburton County will not receive a replacement for the A.J. LaRue Arena mass vaccination centre after June.

Dysart et al and the health unit opted back in March to limit the time the arena would be used as a centre out of consideration for summer and fall recreation, including hockey. The health unit originally scheduled the clinic to last until at least the end of September but changed that to the end in June in response to public outcry.

Health unit director of health protection Anne Marie Holt said people will have other avenues to get the vaccine, including the mass vaccination centre in Minden at the S.G. Nesbitt Memorial Arena.

“The number of opportunities to be vaccinated will remain the same for Haliburton but will just flow through many potential vaccine locations including the Minden clinic site, hospital, pharmacy and primary care providers,” Holt said. “Where needed, the health unit may also plan ‘popup clinics’ in Haliburton to provide second dose vaccines to people who are eligible for them.”

The last clinics at the A.J. LaRue Arena are scheduled for May 27 and June 5.

The news comes as the province opened vaccine appointments for all people 18 and older May 18. But medical officer of health Dr. Natalie Bocking said there are still issues with local supply, which is not meeting the demand brought by the increased eligibility.

“There is lots of demand for COVID19 appointments across our region and some frustration with not being able to get an appointment right now,”

Bocking said. “Our supply has increased a little bit, and it is slowly increasing. At the same time, eligibility expanded quite significantly. So, we still have a mismatch.” Bocking said more than half of the eligible population has received their first dose within the health unit region, amounting to more than 925,000 people.

When asked why the health unit is not making a replacement mass vaccination centre, Holt said “Haliburton County residents will continue to be well-served and supported.”

Holt also said the provincial government should be rolling out more vaccinations at pharmacies in Haliburton and across Ontario.

People can book vaccination appointments through the system at covid-19.ontario.ca/book-vaccine. People are also allowed to book vaccines outside of their geographic area where available.

Two arrested in connection with theft of copper wire