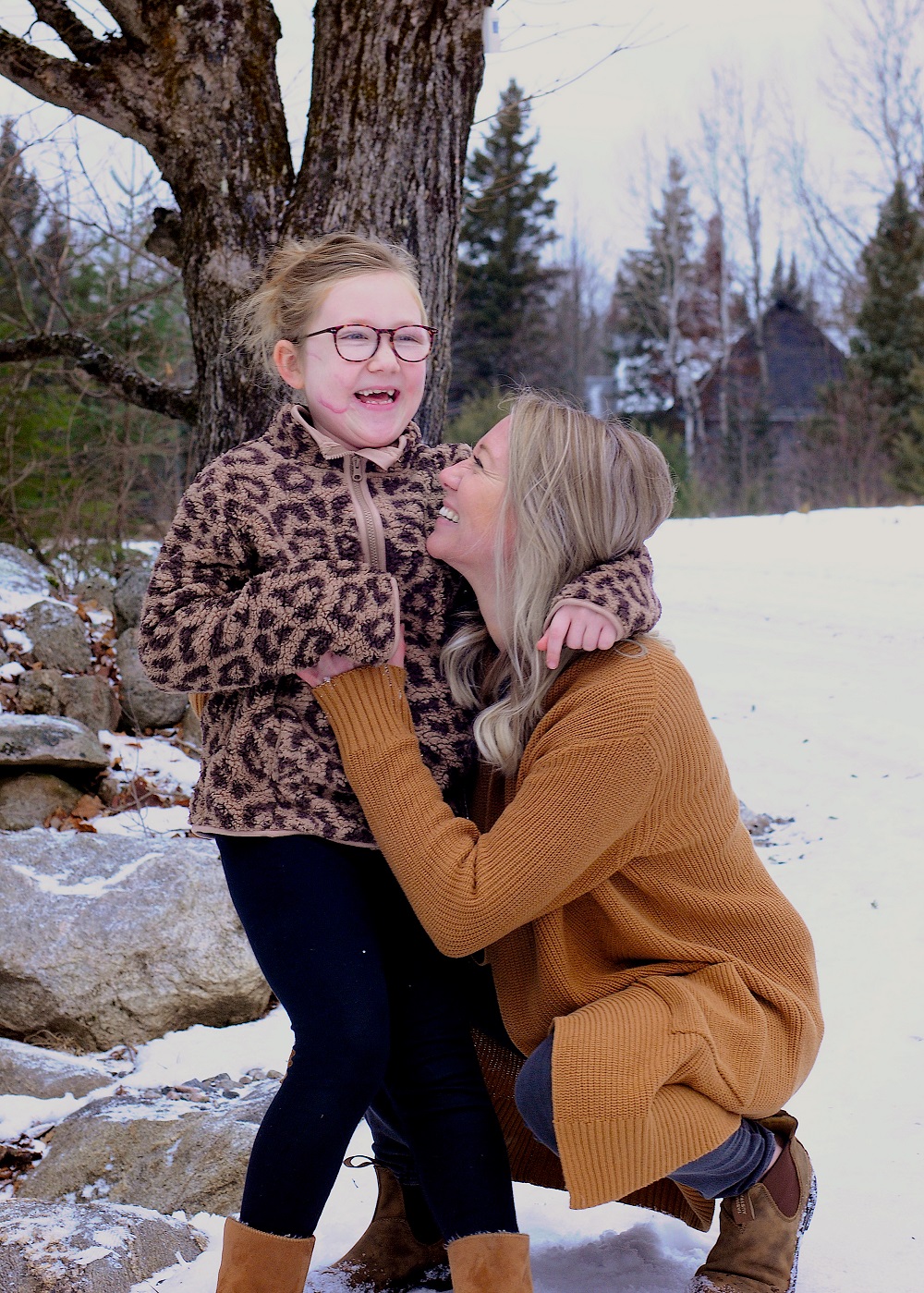 Sadie Lester is just like any other seven-year-old Haliburton County kid, enjoying jumping on her trampoline during Spring break.

The bespectacled girl with the long blonde hair pulled pack into a ponytail briefly joins a Zoom call to say “Hi,” adding she likes going to Stuart Baker Elementary School in Haliburton with her friends, rather than virtual learning. She then runs off to play.

It’s a far cry from a year ago when she was at Sick Kids Hospital in Toronto following a vicious dog attack.

Her mom, Lindsay, also suffered non-life-threatening injuries on that fateful April 12, 2020 day. The events of a year ago have naturally affected Sadie’s father and Lindsay’s husband, AJ, as well as elder child, Addison.

“I would say that this past year, there’s been ebbs and flows,” Lindsay said in an interview. “There’s certain times when we felt like it’s been years since it happened and other weeks it just felt like it happened the day prior.”

An anniversary date is a natural trigger. Lindsay says the smell of spring brings it back. On Easter Sunday, she and Addison were out for a walk and got cornered by an off-leash dog on a public dock. That brought it back, too. Lindsay admitted to an hour in bed crying in the aftermath of that. However, overall, she said the family “is definitely in a good place.”

Physically, Lindsay has long since healed. Sadie has had several trips to Sick Kids for follow-up treatment after a week-long stay last year. There has also been physiotherapy, speech therapy and scar therapy. However, Sadie has just one more major procedure remaining.

God ‘never left us in the ditch for a second’

The Lesters said surgeons will take fat tissue from her buttocks to help rebuild her right thigh. They will also do something called revision, to lessen the scarring in 14 places on the young girl’s body, including her face. Then she’ll need laser therapy. It’s hoped the revision will make a 75 per cent improvement to the visual scarring.

AJ said his daughter is self-conscious about her scars. Tucking her into bed at night, he said she’s commented, “I wish I didn’t have these scars. She calls them the cracks on her face.”

Lindsay added that in some ways having to wear a mask due to COVID has helped ease Sadie back into normalcy.

Mentally, the work continues as well. Lindsay has had counselling and said she has tools in her toolbox to talk herself through her triggers.

Sadie has also been under the care of a child trauma counsellor, who is pleased with her progress. Lindsay explained kids like Sadie are “puddle jumpers” so they will talk about their trauma and then quickly move on to something else. That’s normal. It’s when children aren’t talking about it that counsellors are more concerned.

The family said they also want the public to know that dogs running off leash in public places are not helpful to them, or others that have experienced dog bites or similar trauma.

“We want to remind people of the importance of keeping their dogs on leashes in public places … especially the park in town as numerous times when we’ve been there with Sadie, people have let their dogs run free,” Lindsay said.

Throughout it all, AJ and Lindsay said they have been blessed with solid people in their lives, from family, to friends, to complete strangers who donated towards a $40,000-plus GoFundMe which has helped immensely with the medical expenses.

Both said they would like to thank each and every person in the Highlands who either donated money or sent cards or presents or helped welcome Sadie home April 17, 2020 upon release from hospital.

They also couldn’t say enough about Addison, from the time Sadie came home from hospital to today.

“She was great. She was an amazing older sister. She was a champ,” AJ says.

A test of faith

The Christian family admitted the ordeal has been a test of their faith.

“I have two truths that exist,” she added. “The mother in me, if we were to rewind and he were to say, ‘this is what Sunday’s going to look like,’ no earthly mother could ever say ‘okay.’ But now being able to have experienced how he’s revealed himself through this, and that he is trustworthy and he is kind and he is gracious and never left us in the ditch for a second, I would say that I am at peace with what has happened because of the gains that we’ve experienced from God showing us who he is really is.”

AJ adds he has learned that bad things happen to good people.

“At the end of the day, you realize there is going to be purpose to all this stuff. And if you can’t bring some kind of hope through the situations you go through, then it will probably just make you a bitter person. And I could sense that very strongly and so I thought, you know, I have the tools from going to church for years. I know all the things I’m supposed to do.”

AJ said there are still ebb and flow days for him as well, and days when he is frustrated and angry.

“Our life has changed in the past 12 months. These things happen because we live in a world that isn’t perfect and it’s not meant to be perfect. If it was, then bad things wouldn’t happen. But if you allow him, he can take those bad things and bring good to it and that’s where we’re at.”

AJ said since last year, there have been more good days than bad ones and there has been progressive healing.

One thing AJ said on Facebook last year at this time was that when it was all over, the family wanted to take Sadie to Disneyland. He said a vacation remains on the cards, post-COVID.

Lindsay added, “I’m going to be a puddle when she’s there riding on the rides. I’ll be doing the ugly cry. It’s going to be just horrific to look at.”

But that’s the kind of horrific image this Haliburton County family can live with.

Three people in hospital after collision in Minden Hills