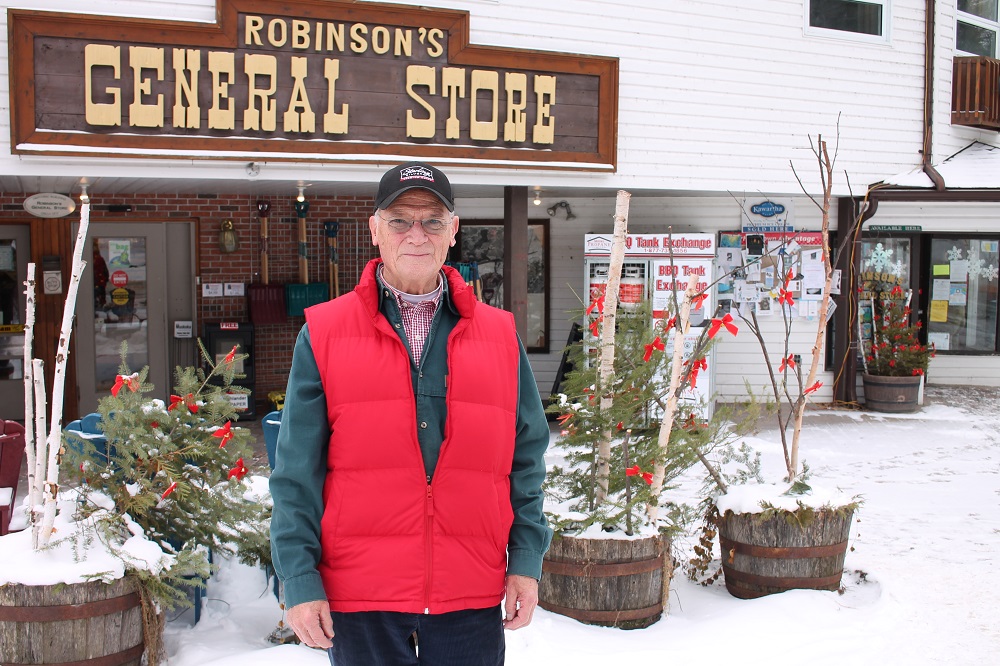 Dorset’s iconic Robinson’s General Store will be under new ownership effective May 1.

The store announced the sale on its Facebook page April 5.

During the store’s 100th year, Robinson said the family felt it was time “to move on and to bring is some new people to take over our business.”

The Hinbests said they currently live in Huntsville and are parents to toddlers, Ethan and Brie.

Mike Hinbest said, “we’re very excited to be part of the Dorset community.”

He added they wanted to let the public know that the store is “100 per cent here to stay. All of the staff are here to stay. And most importantly, the traditions Robinson’s has in the community for the last 100 years are what we look to build upon and be a part of our family for hopefully 100 years.”

He said they basically wanted to say “hi” to the community and thank it for its support as they’ve started this new venture.

“We look forward to meeting all of you. If you see us around please come grab us and say ‘hi’,” Mike Hinbest said.

In a December 2019 interview with The Highlander, Robinson said the decision to sell wasn’t easy, but “it’s time.” His daughter Joanne has been operating the store with her husband Willie Hatton and Robinson said they had decided to retire.

Robinson recalled how he made a decision to sell the store about 28 years ago. He said he was getting “played out” and rang Joanne to let her know of his decision. A few days later, he said Joanne phoned back to tell him not to sell, since they were thinking of moving back home with Robinson’s soon-to-be born grandson, Ryan.

Robinson took over the store at the age of 20 about 65 years ago. He said he and his dad were sitting around the kitchen table and his father said, “why don’t you stay here? [The business] isn’t working the way it’s going now. From now on, you’re going to be the boss and will make the final decisions.”

At that time, the store was small, only 75ft by 25ft. It’s gone through 14 additions since.

Looking back, Robinson said he feels blessed to have lived in Dorset and seen the province release Crown land so the area could be developed in the middle of last century.

“I look back and it was the Ontario government that really helped us in this area. They opened up 97 per cent of the township here for cottage lots and so consequently the country filled up quickly so that’s why we put 14 additions on the store because as the businesses grew, we grew the store to accommodate it.”

He said he’s looking forward to spending more time at the cottage, even having sleepovers.

He said he hadn’t had one in two years. But he’s not complaining. “You do in life what you want to do. If I’d wanted to go, I would have gone.”