There’s an opportunity to visit the sites that inspired Gary Blundell’s current exhibition at the Agnes Jamieson Gallery in Minden. Navigations of Iron is showing until Sept. 26 but Blundell and Kinmount-based historian Guy Scott are offering a workshop Sept. 12.

It is a day-long outing with driving and a two-hour hike – an introduction to the mostly-abandoned iron ore sites that inspired Blundell’s work.

“We will meet at 10 a.m. at the parking lot at Furnace Falls on Highway 503 between Kinmount and Gooderham,” Blundell said. “From there, we will hike to the old smelting furnace and some of the old Victoria Mine sites nearby. After lunch, we will continue by car to Pusey’s church in Irondale and then onto the site of an old railway bridge and the last remaining building connected with Pusey’s IB&O Railroad at Howland Junction near Kinmount.”

Time permitting, he said they may visit the gallery in Minden to view and discuss the paintings that he created based on the sites. Only 10 people, wearing masks, can enter the gallery at one time.

Since the outing is in part a hike through the woods, Blundell encouraged please to dress appropriately, and bring their own lunch and some water.

Scott said Blundell’s work is important. “It’s a big page in our history and a lot of it is forgotten.”

He said while many people have visited the church in Irondale and Howland Junction, the Furnace Falls section is a fairly new tour.

“We’ve been still investigating and doing a little bit of digging and poking and prodding trying to find out more … there’s only about 10 people in the world who know where some of this stuff was,” Scott said.

Blundell said there is no fee but donations are welcome.

“In the 19th Century, the value or iron to human history cannot be underestimated. It was used to build almost everything in the manufacturing, agriculture, resource- based and transportation industries. The railways were as new then as cell phones and personal computers are today and just as important to culture.”

Locally, he said that between 1870 and 1900, there was great hope that the iron ore found between Kinmount and Tory Hill would bring prosperity to Haliburton County. Many came seeking the location of valuable iron deposits, digging test holes in the ground and setting up mine sites. The most notable was Charles Pusey, who as a young man had worked for the new railways in both England and the United States. He came in hopes of becoming a true mining and railway baron.

Sadly, despite setting up a home, building a church in Irondale and the IB&O Railway linking Howland Junction to Bancroft, the iron deposits were poor at best and the entire venture went from hopeful to abandoned, Blundell said.

“The area today is littered with the remains of these activities. Mine test holes and actual mine sites are scattered throughout the woodlands. There are still the remains of railway berms, intact bridges and decaying waiting rooms.” See more at hotspurstudio.com. 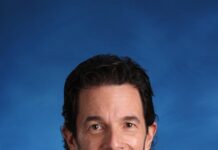