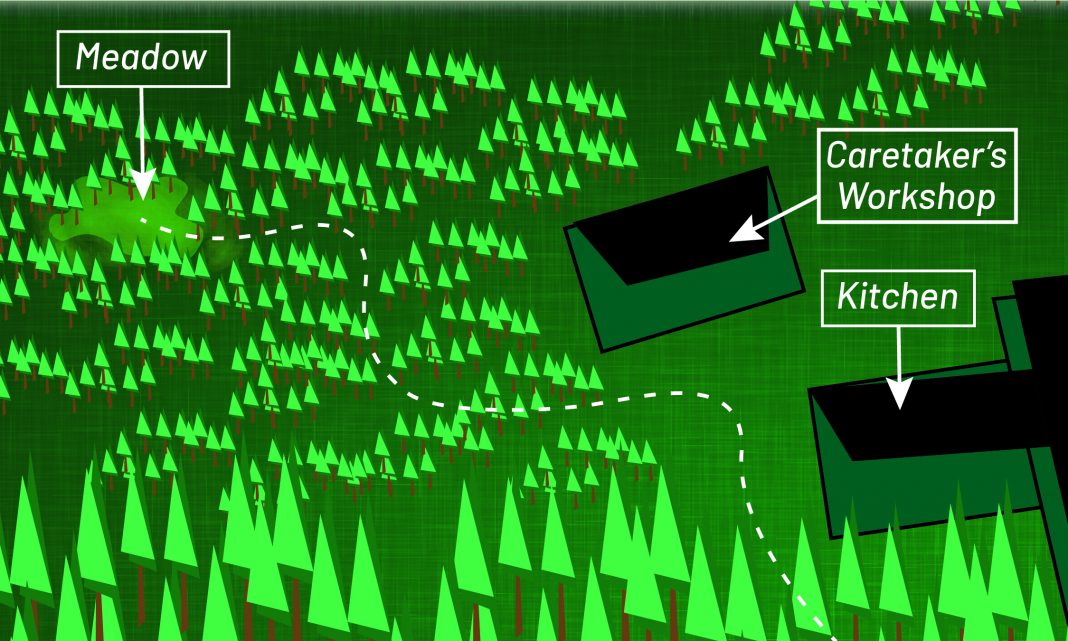 After their interview with 90-year-old Stan Barley, the former caretaker of Pines End, Detective Harry Harp and Constable Terry Becker stopped in at the local café. The two men sat huddled in a corner booth staring down mugs of coffee.

Becker peeled the wrapping off a muffin and took a bite.

“What do you make of Stan Barley?” Harp said.

“He’s grumpy.” Becker pulled a serviette from the dispenser on the table and wiped his fingers. “But that could just be old age talking.”

“Or guilt.” Harp took a sip of coffee. “I’m pretty sure he knows more than he’s saying.” The detective wrapped his fingers around his coffee mug. “Remember what Crystal Corrigan said about antiques?”

Becker nodded. “Sure. They were all over Pines End—even in the kitchen. Muir was so stingy, stuff wasn’t updated and a lot of the antiques were still in use, like the old fridges. So?”

Harp raised a finger. “Crystal didn’t remember the ice pick but it could have been part of the antiques lying around. Look—let’s say it was. Then Stan had the means. And very likely the opportunity.”

Becker nodded. “But what about motive?”

Ten minutes later, the two men were back at their office in the Spruce County Police Department. On a white board, Becker had written the names of all guests and staff and next to each name was a note. “Deceased” was written beside most names.

Fingers clattering over his keyboard, Becker leaned back grinning.

Harp’s desk was covered in the scrawled pages of his ongoing numerology project. He looked up, blinking.

“Just found Trudy Carlyle’s obituary. She died four years ago. Predeceased by her husband and daughters, Emily and Lily.” Becker jumped up and added the information beside their names.

“Everyone who was an adult at the time of the murder is deceased—except for Stan.” Becker sat down and started typing again. “And I’ve tracked down the teenage guests—just waiting on the Moort twins and Adam Barley to get back….”

Harp squinted at the white board, not listening.

Trance like, the detective picked up a marker and drew lines between names. Becker grimaced as Harp destroyed his neat list.

“I get it,” Harp said. “I get the numbers thing!” He frantically drew lines between Mr. and Mrs. Muir, the lodge owners, between the Carlyle’s, between Cat Wilson and Brett Penzler. The detective spun around.

“If we eliminate the Wilson baby, there are 12 males and 10 females. With the most obvious pairings, the Penzler and Moort dads are left out.”

“Left out of what?” Becker scratched his head.

“Of romance! Remember what Brigitte said? People go on vacation for a lot of reasons and romance is one of them.”

Becker’s eyes narrowed. “You think it was a crime of passion?”

“What if Stan’s wife, Irene, was having an affair with Rand Carlyle? And Stan found out….” Harp gestured a plunging motion. “And killed Rand.”

Harp flipped through the original case papers. “Says here, Maclem found empty booze bottles on the lawn. It was concluded that Rand was drunk, stumbled into the water and drowned. But I don’t think Maclem believed that.”

Becker nodded. “Doesn’t the file say Rand was keyed up? Excited? The man was looking for love. Maybe he walked into the woods to find Irene Barley.”

Becker put his fingers together like the preacher in ‘Night Of The Hunter.’ “But instead, he found hate. I mean, in the form of death.”

Harp’s eyes flashed. “Stan could easily have spied on the party at the fire pit and when he saw Rand leave, all he had to do was follow him. And Rand was stabbed in the back.” The detective sat down. “This wasn’t a confrontation. This was the swift elimination of a problem.”

Just then Harp’s phone buzzed and he answered it. The detective looked momentarily confused then thanked the caller and hung up.

He shrugged. “Cat Wilson’s back.”

“And the cat came back….” Becker said, grinning.

A couple of minutes later, the two men sat down across from the tanned retiree. Harp smiled. “What can we do for you today, Ms. Wilson?”

“Call me Cat,” she said brusquely. “Now I want to add to my earlier statement thingy. Just to be completely honest.” She shifted in her chair. “There was a kid called ‘dogsbody’. I don’t know his name, anyway, my sister and I were, well, rather cruel to him.” She threw her head back. “Nothing criminal. Just mean. As kids can be.”

Cat was silent. “He was a local kid and we were from the city and we just, well, we felt superior.” She smiled widely. “Of course, I’ve changed, I mean, I live here. I love Spruce County!”

“Oh,” Cat said quietly. “Oh, of course! His mother and father worked there.”

Harp leaned forward. “Do you remember seeing Rand Carlyle with either of them?”

A few minutes later, the interview ended and the two men sat alone in the meeting room.

“Prejudice is interesting?” Becker pointed at the door Cat Wilson had just exited through.

Harp said, “No. But think of Stan. He discovers Rand Carlyle with his wife. And Rand is from the city! Rand could have had that same superior attitude.”

Becker looked out the window. “Stan would have hated him even more.”

As the fire died down, people drifted into the lodge. Before Rand Carlyle joined the flow, he cast a look over his shoulder at his wife, Trudy. She was deep in conversation with Mrs. Wilson, the flames casting an orange glow over both women’s faces.

As other guests crossed the terrace and entered the lodge, Rand stepped to the left and disappeared into the darkness. The route through the woods to the little meadow was familiar, even in the dark. He’d made the same trip once already that day and many times during the week, ever since the first meeting, the first moments of connection. Yes, it was dangerous but the danger just made the whole enterprise more exciting. He turned at the little building and stepped into the forest as a woodland chorus played around him—a croak and a buzz here, a rustle there. Then another sound: quick footsteps. Rand smiled and started to turn—when sharp metal sunk into his back and searing pain made him freeze. He stumbled forward grabbing at the air, then collapsed on the forest floor. Filling with blood, his throat constricted and he gasped, breathing in the damp scent of moss and pine bark and his mind began to close and as it did, he held on to one image—the face of love—until that, too, was gone.