Home Arts Puzzling over Heaven on the Hangdog Channel 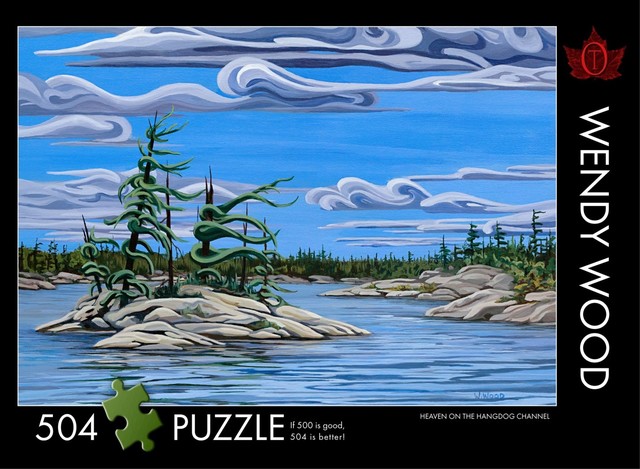 Puzzle makers Michael Bainbridge and Brigitte Gall say they craft for “art geeks and science nerds” so it seemed only natural to do a Canadian Artist series. They will kick it off at their business, The Occurrence, Aug. 21 with first artist, Wendy Wood, on hand to sign puzzle boxes.

Until now, they have focused on earth sciences and Canadian cultural images but, according to Gall, “we chose the umbrella of ‘Canadian Artist Series’ to capture a diverse range of art that we also wanted to include.”

Wood, who has a studio in Carnarvon, is a landscape artist, and the first artist in the series.

“We really love her work, and asked her last year if she’d consider working with us. Heaven on the Hangdog Channel is a gorgeous image that we all thought would make a beautiful puzzle,” Gall said.

From there, Gall said they are keen to cast the net far and wide for other artists.

“We’ve got a couple of other Haliburton County artists in mind that we’re talking with, but we’ve also reached out to artists in Toronto, Newfoundland, and BC. We’d like to include tag artists, Asian and Indigenous artists, as well as text and graphic artists.”

She said the images not only have to be compelling, but also have to make a great jigsaw puzzle.

For her part, Wood said it’s a completely new experience. She said Gall approached her with the idea and she didn’t hesitate in saying yes.

“I’m really looking forward to it,” she said. “It’s good exposure for me and will hopefully be a good seller for them.” She added that she likes doing puzzles so it will be “kind of cool” to do a puzzle of one of her own paintings.

Gall said The Occurrence, at 130 Industrial Park Rd. in Haliburton, really got started this past July 1. She said although they took possession of the space last October, due to COVID-19 they didn’t get their new machine delivered and wired in until nine months later.

Initially, they were only focusing on fossils, minerals and gems but when shelter-in-place started to happen, they saw a huge upsurge in jigsaw puzzle sales. They decided to start designing and exploring Canadian historical pieces such as Dutch Bulbs, and Uncanny Robot. Dutch Bulbs is the cover of the Steele, Briggs seed catalogue from 1905, and Uncanny Robot (1943) is the cover of Canada’s first pulp fiction magazine.

“Being located on Industrial Park Road has been a huge bonus. Everyone has to go to the landfill. We’ve had really fantastic response from lodges and lake associations looking for custom puzzles, local and seasonal residents stopping in because they can’t believe there’s a jigsaw puzzle manufacturing company here in Haliburton, and online sales. No one knows what’s going to happen this fall, so people are starting to stock up and getting ready to hunker down,” she said.

She added that with COVID turning the world upside down, jigsaw puzzles offer a way to make order out of chaos that doesn’t require Netflix, competition, or a Zoom meeting. It’s also something people can do alone, or with family.

“Australian Prime Minister Scott Morrison referred to jigsaw puzzles as essential, and allowed people to leave the house to buy them during lock down. Three cheers for Mr. Morrison!,” Gall said.

The Occurrence also offers tours of the factory.

“When we show people how we make puzzles from start to finish, people ask ‘how the heck did you learn how to do this?’ It was a lot of trial and error, sheer stubbornness, mentoring from local business owners Jenn and Terry Craig of Artech Studio, and financial help in the way of matching grants and government programs offered through HCDC. None of this would have been possible without the outside help of family, friends, and HCDC,” Gall said. 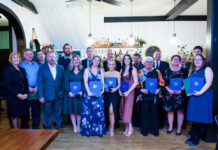