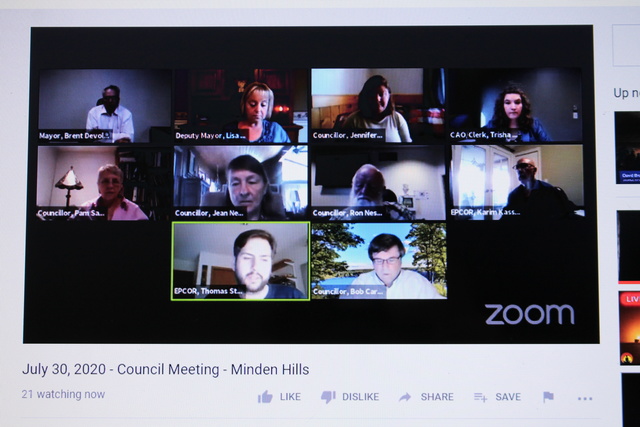 Minden Hills councillors have agreed to provide a letter of support in principle to utility infrastructure developer EPCOR, so it can apply for an Ontario government grant in hopes of bringing natural gas to the region.

Stachowski said the province is providing $130 million in grants as part of its phase two natural gas funding initiative. He said the deadline for applications was Aug. 4. Both he and Kassam indicated that with just $130 million available, and Enbridge also expected to apply, it would be competitive.

Stachowski said the company had been looking across Ontario for areas that don’t currently have natural gas and could benefit from it. He said in Minden, which has been flagged as being difficult to bring a pipeline to because of its geology, “gas would be trucked to a central depot. From that depot, a distribution system would be constructed within the central part of Minden that’s looking to get connected to natural gas.”

“We’re looking for the ability to bring alternative fuels to communities, that are hopefully competitive with the current fuel that’s available for the lowest price. In many of these communities, that’s typically propane,” Stachowski said.

He said they are also looking into the prospect of delivering fibre optic while bringing natural gas to homes and businesses.

“Many of the communities we’ve spoken with, although fibre is available in the areas, it’s a challenge to bring it to the homeowner or end user and it’s something we’re trying to simplify and improve that ability,” he said.

Stachowski added although they were talking to council just six days before the application deadline, they felt they had enough information to put the grant application together for the Ontario Energy Board and the Ministry of Energy.

He said a letter of support was crucial but “doesn’t commit the community to moving forward with the project.” Kassam said to work, they’d need a 60 to 80 per cent subsidy and people to agree to convert to natural gas. The two said they had a letter of support from Bancroft.

Council voted 6-1 in favour of providing the letter.

Deputy mayor Lisa Schell said it is a low income community. She said she had just converted to propane from oil and the cost savings is significant. “So, going to a natural gas option for people in our community would save them a lot of money … Considering there’s no commitment, I’m fully prepared to support this at this time.”

Coun. Pam Sayne voted against. She said the community was looking into local energy options. For example, she said there was water power if the federal government would allow it. She also felt there should be community consultation, as well as balancing environmental and development needs.

Kassam said there would be future environmental review of the project and public consultation.

“If we do not get the support of the community at large, and we do not satisfy the environmental requirements of the project, then the project will not proceed anyway,” he said.

Coun. Jean Neville said after hearing the presentation and the answers to questions, “I really don’t see the harm in the letter of support … I think we should give the people of Minden that opportunity to be able to choose this.”

Coun. Bob Carter, who initially did not support issuing a letter, said he would do so “as long as we have the option of saying no, we don’t think this is good for our community.”

Coun. Ron Nesbitt said his concern was that ratepayers already struggling to make ends meet are not further burdened, while Coun. Jennifer Hughey was in favour of giving them an option to choose alternate energy sources.