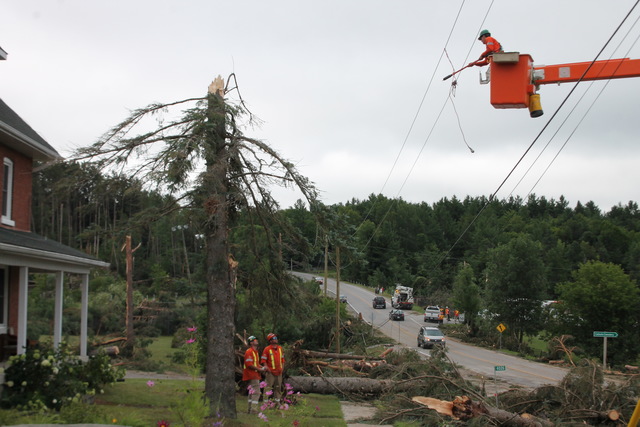 Lorraine Turcotte was already in the basement of her Kinmount home when her husband shouted for her to head there in the early evening of Aug. 2

Confused, she ran upstairs as a down burst, or possible tornado, ripped through the area in about 30 seconds.

“It was horrible,” she told The Highlander on the afternoon of Aug. 3 while family helped her and her husband remove downed trees from their property.

She added it was “unbelievable.”

“We had a huge pine tree in the front yard. It was gone. It ripped all the Hydro and the Bell lines down.”

The storm left a swathe of devastation as it tore up trees, snapped Hydro poles, and damaged rooves and sheds. It closed a section of Highway 121 for several hours.

Turcotte said they also worked with Hydro One to remove downed trees as their road – Bobcaygeon Road – was blocked at both ends.

Alison Haecock lives along the highway. She recalled what it was like around 5:30 p.m. Sunday night.

“It was over so fast. There was this tremendous crashing and thumping and then this noise …  like a train going through.”

Like many, they had helpers using chainsaws and chippers to clean up the mess the next day.

“My husband belongs to the Haliburton trail riders. He put out the call, ‘hey, we need some help.’ And I’ll tell you, many hands make light work.”

Gord Domik, who also owns a home along County Road 121, said “it was a sound that I could never describe. It was the weirdest thing. You hear the normal wind and then all of sudden, you hear the tornado wind. And it was like a whole different ball game. I said to my daughter, ‘I think we should get in the basement.’ I said, ‘that doesn’t sound right.’

Domik said he was surprised houses were not completely destroyed especially since “some of these trees are actually huge, too, just ripped right out of the ground. I’ve never experienced a tornado in my life.”

Environment Canada has not confirmed that a tornado touched down. It may have been a down burst. OPP tweeted Sunday night that the road was closed due to storm damage.

Hydro crews worked to reopen Highway 121 and remained on scene to repair snapped Hydro poles and downed lines. Enormous trees were pulled from the ground and laying across roads, in yards, and in cemeteries.

The sounds of chainsaws and chippers reverberated across the village and some small fires were set to burn brush.

Board members pan Dysart for plan to charge rent for assessment...