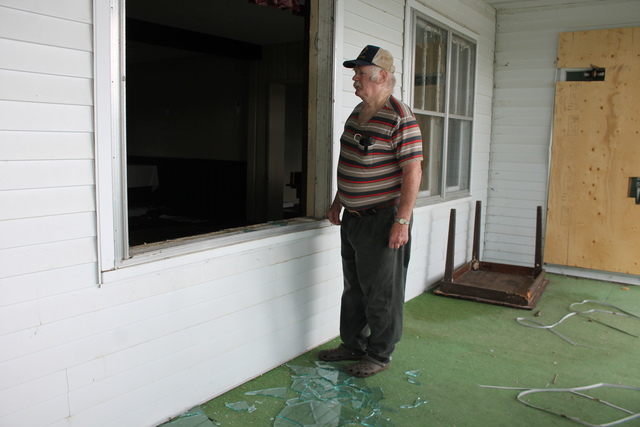 Keith Robertson stands on the road facing the Wigamog inn, looking at the crumbling former resort that he grew up in.

The 74-year-old is the adopted son of Merv and Alison Robertson. He lives just down the road from ‘The Wig.’ The family patriarch, William Robertson, bought the property from the Gould family in 1917, first taking in guests in 1922, giving birth to the inn on Lake Kashagawigamog.

“When I was about that high,” Keith says, holding his hand about two feet off the ground, “we used to live in there. In the summer, we had a cabin to stay in while the lodge was running. In the winter, we moved back into the lodge. And then finally my dad built a house in 1951 or 1952.”

He points out a stone chimney at the inn, which was built in 1898, and is still standing at the inn.

A large picture window gaped open with smashed glass on the railing and porch. Inside, the ceiling is falling in, black mold is visible, furnishings left inside are strewn about.

From the road, one can see remnants of a swimming pool. Some of the fencing is broken. A deer is startled inside the enclosure and knocks down one of the white, iron gate pieces as it crashes onto the ground. There is stagnant water in the pool.

“It’s totally destroyed,” says Robertson, looking around and pushing his baseball cap back off of his forehead in the morning heat.

Earlier this year, Riddin Ryder the Adventurer posted a video to YouTube after entering the inn and its grounds. There are no fences or ‘no trespassing’ signs.

The video reveals items left behind and crumbling infrastructure, including black mold throughout.

Robertson said he watched a bit of the video but it was too painful to view the entire thing.

“I’m seeing rooms I saw when I was this high … and my mother and dad were working away.”

The family owned the resort until it was purchased by Art and Joan Ward in 1967. It was under the Ward’s that the million-dollar conference centre was added to the original inn. Kimberly and Christopher Grossman purchased the Wig in 1993.

The inn changed hands until on March 3, 2016, The Aurora Group announced the purchase of the Wigamog. At the time, they’d already bought the Pinestone.

“We have some great ideas of what this property can look like in the future,” said CEO Ravi Aurora in a media release. “Buying this resort made so much sense for the future of Pinestone and for area tourism. This is an investment in our area economy and community,” he added.

Aurora said the building and property were still being assessed but The Moose Bar and Grill and some of the rooms could be open by mid-summer 2016.

Pinestone general manager John Teljeur was quoted at the time as saying, “We are excited for the collaborative potential of both properties, area tourism and the jobs it could bring to the Haliburton Highlands … this is a chance to reset the tourism clock.”

However, it appears that clock has stopped.

On the Aurora Group website, there is a tab advertising the company’s portfolio, with a prominent section on a “new residential development in Wigamog Resort, Haliburton.”

It reads, “located in Haliburton, the Aurora Group is building a new residential development on over 40 acres of land. Choose from an incredible selection of 180+ units with home designs including Condos, Towns and Detached Homes.”

The ad is accompanied by a map detailing the plans.

On July 6, The Highlander asked Dysart et al director of planning and land information Jeff Iles what, if any, plans the Auroras have lodged with the township for the Wigamog property. He responded, “The municipality has not received an application or proposal for the Wigamog site.”

The Auroras have approached the township about a piece of land they own along County Road 21, to the east of the Pinestone property, and where they have discussed building a gas station, car wash, and fast food outlet.

Iles said the municipality currently has an active site plan agreement application for that piece of land. He said staff continue to work with the property owner and their development team to move the project forward.

Iles added that at a Jan. 28, 2020 Dysart et al council meeting, council reviewed a proposal to sever the proposed development from the remainder of the owner’s property. Council passed a resolution supporting the proposal, subject to conditions. Following council’s recommendation, the property owner must submit a formal application to the County of Haliburton, which is the approval authority.

On July 14, Aurora replied, “I appreciate you reaching out to me. Unfortunately, we are currently very busy dealing with COVID protocols and realigning business practices and need all the time we can get within our operations. Try reaching out around September when things tend to calm down a bit.”

The newspaper responded that the community had concerns about the properties and it could forward email questions or do a short phone interview.

Aurora replied, “As I appreciate the concern, and we deeply care for the community and Pinestone’s involvement with the area. We just aren’t in the position to make any comments at the moment. I hope you understand.”

Keith Robertson and his wife, Julia, say they have contacted Dysart et al about the state of the Wigamog property.

Julia Robertson said she has complained to bylaw enforcement about the height of the grass in the past. As recently as July 14, she sent a memo regarding fire concerns.

“The property is abandoned and if a fire was to start, our fire department plus mutual aid could not contain the fire,” she wrote.

“My question is who will be held accountable for any fire damage to adjoining properties?”

The Aurora Group also owns other accommodation properties in Ontario, including the Sheraton Four Points in Brantford, which the Aurora website says is currently under renovation.

However, the former Brantford Hotel sustained a fire on Feb. 12, 2020 and the Auroras were issued with a demolition order.

Director, communications and community involvement for the City of Brantford, Maria Visocchi said a series of orders were issued over The Brantford Hotel “in response to the continued neglect and unsafe conditions on the property.”

She said a demolition order was appealed but upheld. The owner was granted an extension but demolition has now occurred.

Visocchi said, “it is my understanding that the Aurora Group held ownership of the property throughout this process.”

Julia Robertson believes the Wigamog should be demolished since she does not think the Auroras are going to do anything with it.

Keith Robertson is also skeptical they will follow through on original plans, saying “they didn’t know anything about the County. They couldn’t care less as long as they got this stuff.” He rubs his index finger and thumb together to indicate money.

The Robertson’s don’t think Dysart council is doing enough, either.

“As the old timers would say, this council is as useless as tits on a bull,” Julia Robertson said.

“They should be acting upon their bylaws. The fact that it’s a fire hazard right now; it brings down property values that way it is right now; it’s unsafe; it’s not gated; you could fall in that pool and you’re not getting out. It needs to go.”

She added it is not fair to the nearby taxpayers of Silver Beach and their upscale homes to “have to look at this rundown thing … and the Auroras are doing nothing.”

Dysart et al bylaw enforcement officer Robert Mascia said bylaw enforcement is usually complaint driven and “we haven’t had that many complaints.” He said his predecessor went out last year over a long grass complaint and the owners complied with her order. He added there had been one complaint this year, recently, over a broken window, which had since been boarded up. He said he checked on the property as recently as July 23. He acknowledged the township had also had a note about the fire risk.

Mascia added he was currently in discussions with Teljeur, “speaking about a possible course of action to prevent people getting in there.”

Mayor Andrea Roberts said on July 27 that she had spoken with Julia Robertson. She said after that conversation, she messaged the fire chief and bylaw officer.

“Both have been investigating her concerns. I also know the bylaw officer has contacted the GM of Pinestone, John Teljeur to let him know what they need to do to secure the building and some progress has been made.”

Roberts said she had met with the Auroras several times “and they have some grand plans for the property, but they have not made any applications to the township or even had pre-consultation with our planners. They also have plans for a development on County Road 21 but that appears stalled as well.

“I’m sure it has been challenging times being in the hotel business these last few months,” the mayor said.

“While it is an eyesore and very sad so to see a wonderful landmark on the lake be in such a state, the municipality is doing all it legally can do. We will continue to monitor the site to ensure it is not a fire hazard.”

Keith Robertson says the plight of the Wigamog Inn breaks his heart.

“It does, and then I go by and another window’s broken. It’s bothered me from day one. It was alright when Art Ward had it.

“It’s my home. I remember helping my mother do the laundry in the fall and hanging it up on the clothesline and the kitchen. It was home.”

Associations warning speeders to slow down