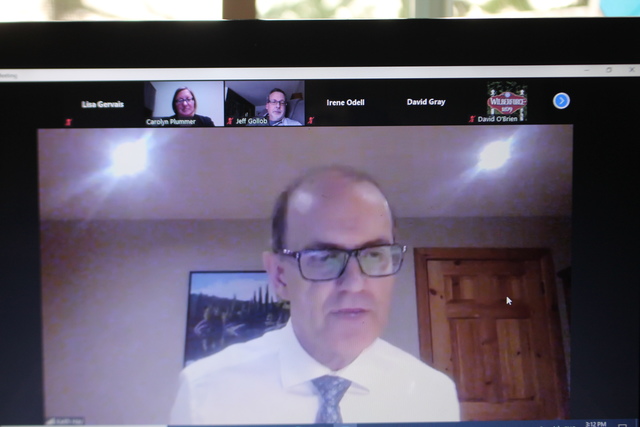 A new full-time emergency department physician has begun working for the Haliburton Highlands Health Services (HHHS), while another is in the works for the fall, HHHS CEO and president Carolyn Plummer told the board during its annual general meeting July 16.

On a day when the Haliburton Highlands Health Services Foundation should have been staging its annual Matt Duchene Charity Golf Classic, the board held its first-ever AGM via Zoom due to the COVID-19 pandemic.

Board president Jeff Gollob said it was the 24th AGM and, “I’m pretty sure this is the first time we’ve held a virtual annual general meeting.”

Plummer told the board they’d collaborated with the physician recruitment coordinator that was hired by the County of Haliburton and had been able to recruit two emergency medicine physicians, one of whom has officially started and the other expected to start this autumn.

“And then a couple of additional locum physicians who have expressed interest in settling in this community. So, we’re on a great path when it comes to physician recruitment and I think that’s a huge accomplishment,” Plummer said.

Chief of Staff, Dr. Keith Hay, also acknowledged the work with recruiter Cheryl Kennedy “and many other individuals in the community,” in getting the full-time ER doctor, as well as anticipating other physicians joining the medical community in the near future.

“Having a new full-time emergency physician has reduced the number of emergency room shifts filled by Health Force Ontario’s emergency department locum program which we’ve depended on for some time,” Dr. Hay said.

Although COVID-19 has dominated the health scene locally, the AGM was for the fiscal year ending March 31, 2020 so was not the main focus of the meeting, although management and staff were praised for their reaction to it.

Plummer said the pandemic had delayed work on the Ontario Health Team (OHT) initiative but it was expected that process would resume, with a meeting scheduled for July 17. The province has mandated the creation of OHT’s and HHHS and its partners have been deemed to be ‘in development.’

Fiscally, despite its many challenges, including repairing the Highland Wood long-term care roof at a cost of $247,267, HHHS recorded a surplus of just over $20,000.

Auditor John West, of Grant Thornton, said “To realize a surplus on a $27 million operation is a significant achievement.”

It was acknowledged that the services could not have done that without the support of the Haliburton Highlands Health Services Foundation, and the Haliburton and Minden Hospital auxiliaries, which brought in $750,000 worth of equipment combined.

In her lengthy report, Plummer said it had been a busy year, with more than 11,000 visits to the Haliburton Hospital ER and close to 15,000 in Minden. She added that acute care numbers were on par with last year. Telemedicine received close to 1,500 visits, saving more than 465,000 kilometres, and more than 6,600 hours of travel time.

She said they’d put in a privacy screen in the palliative centre; added new beds in Haliburton thanks to the auxiliary; and new cardiac telemetry equipment thanks to the Foundation.

Plummer also highlighted the importance of HHHS volunteers, saying they had well over 300 active volunteers who had put in nearly 30,000 hours.

For more information on the AGM, visit the HHHS website.