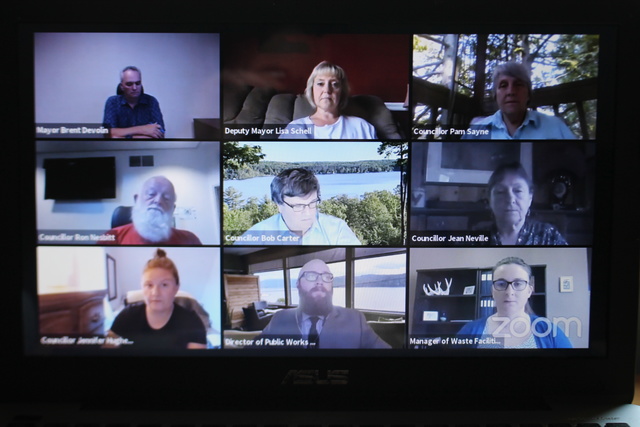 Minden Hills taxpayers are now able to take other materials to two waste disposal sites, after being restricted to just household garbage and recyclables for months.

Council voted July 2 to allow exact change payments of cash immediately and a digital payment system in the very near future.

Just two weeks earlier, they voted against going entirely cashless with a Square system at Scotch Line and Ingoldsby.

Director of public works, Travis Wilson, thanked staff for bringing the item back to a special meeting.

“Staff were eager to get a form of payment for Scotch Line and Ingoldsby sites and hope the changes proposed in this report can receive the support of a majority of council,” he said.

Wilson explained, “if you come in with $5 for garbage (if you are over the bag limit) and only have a $10 bill, we have to accept a $10 bill, or perhaps a digital payment.”

The system, designed to limit contact between the public and landfill staff during COVID-19 would be in place to Oct. 31, and then reviewed.

Coun. Bob Carter asked when the changes could be implemented. Wilson said the cash option could be done almost immediately but it could take two to three weeks from July 2 to get the digital payment system up and running.

Coun. Jean Neville wanted cash payments to be accepted as soon as possible. “There is going to be a lineup at (Highway 35) with just the people I know who have been after me about this construction waste,” she said. “I’ve had people that have taken pickup trucks there twice and had to go home and unload them because they’ve been turned away. There’re people that have drywall disintegrating into their yards that they’re trying to get rid of, trailers that are full to overflowing and we have to start this like today. I have people constantly, every day, at me about this. I’m losing sleep over it so we can’t wait any longer.”

Wilson said no other municipality is accepting cash payments, and “in terms of getting things started, staff would have liked to have this in place two weeks ago, however we’re back at this again today.”

CAO Lorrie Blanchard expressed some reservations. For example, she said council had to consider scenarios such as, “someone comes up and they say ‘I’ve got a $20 bill and I wanted to bring an extra bag of garbage with me’, which is $2 and we’re not going to give them $18 back and the person says, ‘you know what? I was going to buy a bag of milk with that.”

She said she was also seeking a legal opinion as the township could also be dealing with its fees and charges bylaw. She noted the discussion also was cross-organizational, such as the handling of money at the administration office when reopened.

Mayor Brent Devolin asked if they couldn’t just proceed unless a reason came up that they could not.

Coun. Ron Nesbitt agreed, saying he’d had numerous calls from people about when the township will accept other items. He said he’d also had calls about illegal dumping.

Coun. Neville added, “We’re infracting ourselves on the clean and clear bylaw with people’s yards.”

Coun. Carter said the township shouldn’t “confound” the issue but just stick to landfills for now.

“As long as you put it out there … (that people) need correct change, then so be it. Just do it and get this going. The decision we make today is not necessarily the decision six weeks from now. See what the issues are, refine as we go along. Be logical about this and get it going.”

Coun. Pam Sayne said there would be lineups and proper staffing must be in place to manage traffic so people can get in and out as quickly as possible

Kawartha Lakes wants to hear from public on housing plan