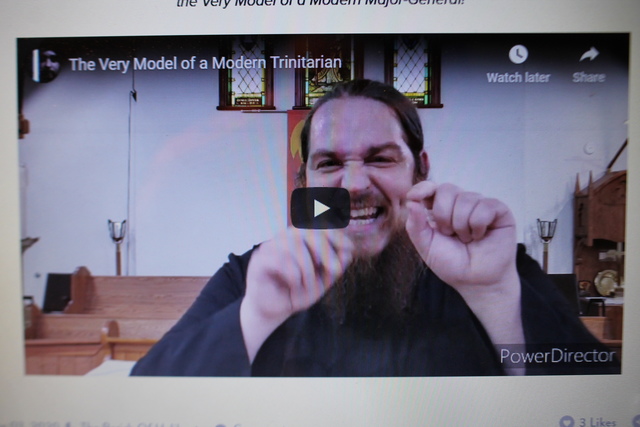 Explaining the Holy Trinity by adapting the words from a Pirates of Penzance song is something Rev. Ken McClure would never have imagined pre-pandemic. However, he recently belted it out his version of the Major-General’s Song during a St. George’s Anglican Church virtual service.

“It’s gone viral with 5,000 views,” McClure said in an interview. “Suddenly, a little Anglican Church in Haliburton is being watched in places such as Australia, America, and Britain.”

COVID-19 has brought challenges to places of worship, but also silver linings.

The province announced May 8 that they could reopen as long as parishoners who are not from family groups sit six feet apart, and only fill 30 per cent of the building’s capacity.

However, Rev. McClure said St. George’s won’t be opening any time soon, and will continue with its Facebook Live and YouTube virtual services for the foreseeable future.

“We won’t be opening our doors until at least September,” he said, adding they’re following directives from church hierarchy. He said it will be onerous to meet the government’s requirements for social distancing, and much has to be worked out about things such as: not exchanging handshakes during the peace; communion and singing.

He added a large part of their congregation is from a vulnerable demographic.

“It’s going to look so very different,” he said.

However, he has thrived on digital infrastructure that has allowed him, organist Bill Gliddon, and his wife Becca McClure to socially distance in front of two cell phones to deliver live or recorded services.

“We’ve been livestreaming since mid-March. We provide visuals of the building, sing, people can sing from home, so we get to have the sensory experience of our worship that is familiar and comforting,” he said.

McClure added that there have been pluses with regards to reach.

“It’s no big secret there has been a decline in church attendance in some denominations. People are coming less and less. But since March 15, and going online, the number of participants has more than doubled what we get on a Sunday.”

He added the platforms has given him a lot of different opportunities to promote the Christian message, such as the Pirates of Penzance adaptation, which he called ‘The Very Model of a Modern Trinitarian.’

“There is an advantage and it draws us into what our calling is, which is to go out and preach the gospel, since gathering is so essentially important to the Christian experience,” he said.

He admitted it is pretty different preaching to empty pews.

“It’s me in front of the altar looking at two cell phones, one is recording it, and one is live streaming it. Bill Gliddon is six feet away on the organ and sometimes my wife Becca McClure is there.”

As for the rest of his ministry, he said he’s been making a lot of telephone calls in lieu of seeing people in person. He added they have a network of the St. George’s family looking out for each other. However, it has been hard with people going into hospital or passing away as he can’t be there in-person.