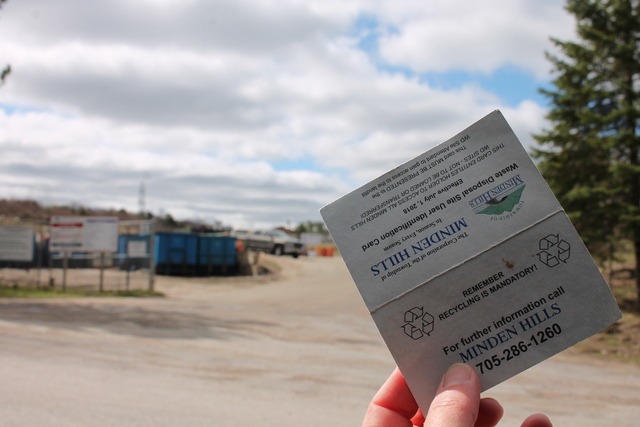 Visitors to Minden Hills’ waste disposal sites won’t be getting a new landfill pass that tracks the number of garbage bags they drop.

Councillors rejected a recommendation from staff to make a change at the May 14 committee of the whole meeting. They are expected to formalize the decision when they next meet May 28.

Public works director Travis Wilson said it’s now a bit of an “honour system.” He said households are allowed three bags per week, but there is nothing stopping them going back, or to another landfill site, in the same week, thus dumping more than permitted.

“It is impossible for a site attendant to remember who has attended the site each week and there is no method of cross referencing who has attended each site,” Wilson said. He added that in order to ensure users stay within weekly bag limits, most have to go once a week, which is time consuming and an undesirable task for some.

Staff suggested a new waste pass be printed with numbers that would be hole punched by site staff to help track how many bags of garbage have been disposed of by the resident.

Wilson conceded it was difficult to determine what the reduction in waste transfer/landfilling costs would be or how much increased tipping fee revenue would be recovered from users paying for additional bags of waste. However, he said they could encourage residents to make fewer trips to the landfill.

“If every household in Minden reduced their trips to the landfill by just two visits per year, 23.27 tonnes of CO2 emissions could be prevented (the equivalent of taking six vehicles off the road for an entire year),” Wilson said.

Coun. Jean Neville said she saw a lot of problems with the proposal, particularly now when the township is trying to limit contact between landfill attendants and the public due to COVID-19.

She said she only generates one small grocery bag a week, while others are bringing theirs and their neighbours. “So, they’re going to being passing their cards back and forth.” She added she’d already had several emails about garbage being dumped on the side of the road, and new punch cards would exacerbate this. She also thought there’d be a backup of vehicles with the hole punch system.

She asked what other municipalities are doing, since “We seem to throw more obstacles in the way than anybody else and I don’t see that this is necessary myself.”

Coun. Bob Carter asked why they would change anything with no data to show savings or increased revenue. He added COVID-19 isn’t going away any time soon. As a visitor to Ingoldsby waste disposal site, he anticipates it would cause congestion. Nor does he want people storing garbage that could attract vermin.

“I applaud the effort but I see this as a solution looking for a problem.”

Deputy-Mayor Lisa Schell thought the timing was off with social distancing. She added, “has it (excessive dumping) really been that big of an issue?”