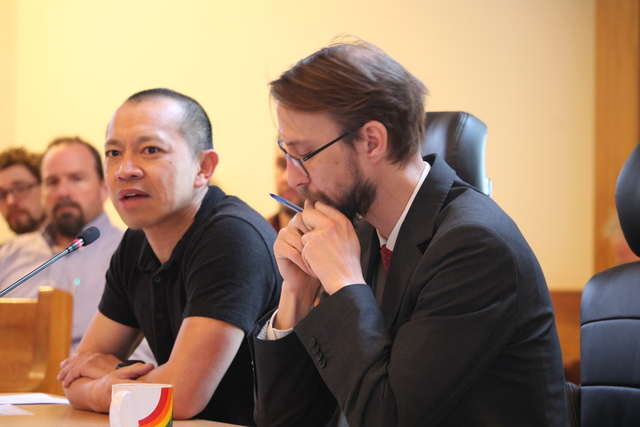 The owner of the former ambulance bay property on Milne Street in Minden is proposing to build five dwelling units on the second floor.

Phong Tan’s Ocean and Echo Investments is the registered owner of the building that also borders Bobcaygeon Road.

Tan, who is also co-owner of the adjacent Minden Pharmasave, spoke to Minden Hills Council March 12.

The report before the committee of the whole meeting was for a proposed zoning bylaw amendment and an agreement to permit cash-in-lieu, instead of 10 parking stalls.

Phong told councillors “people living downtown bring life to the community.” He said it helps to produce a thriving downtown core since residents patronize stores, services and restaurants “allowing other businesses to thrive as well.”

He said winters are the hardest time for local businesses, and having downtown residential tenants will help them survive, since “locals support each other.”

He noted there was a huge housing shortage in the community and it makes it difficult to get health care professionals to remain as a result.

John Thomas, who owns Stedman’s V & S, said he wanted to ensure only the second floor was converted to living space, allowing the bottom to be open to business. He added council had to address the issue of the 10 parking spots, asking where the tenants will park. He said other businesses could lose downtown parking along Bobcaygeon Road.

Town planner Ian Clendening said his follow-up report would address parking issues, saying there was nothing to now stop tenants taking up one third of Bobcaygeon Road spaces. He said he would have to look at things such as limiting parking time and snow clearing.

“With council’s direction, we can come up with solutions to that,” Clendening said.

Coun. Pam Sayne said she loved the idea of dwelling units on the top of the building, but was concerned about existing commercial tenants being able to remain there.

Coun. Bob Carter said in some cases the existing two parking stalls per unit bylaw shouldn’t always be the case. He suggested rules around overnight parking had to be looked into as well.

The proponent is suggesting units as large as 992-square feet to as small as 592-square feet, with one and two bedrooms.

Tan said when he moved into Fenelon Falls as owner of the Pharmasave there, the downtown was suffering. He said there were empty commercial buildings and it was “painful” to see stores shut down.

Now, he said there’s been a great effort to revitalize the downtown core. He said he’d like to see a similar turnaround in Minden.