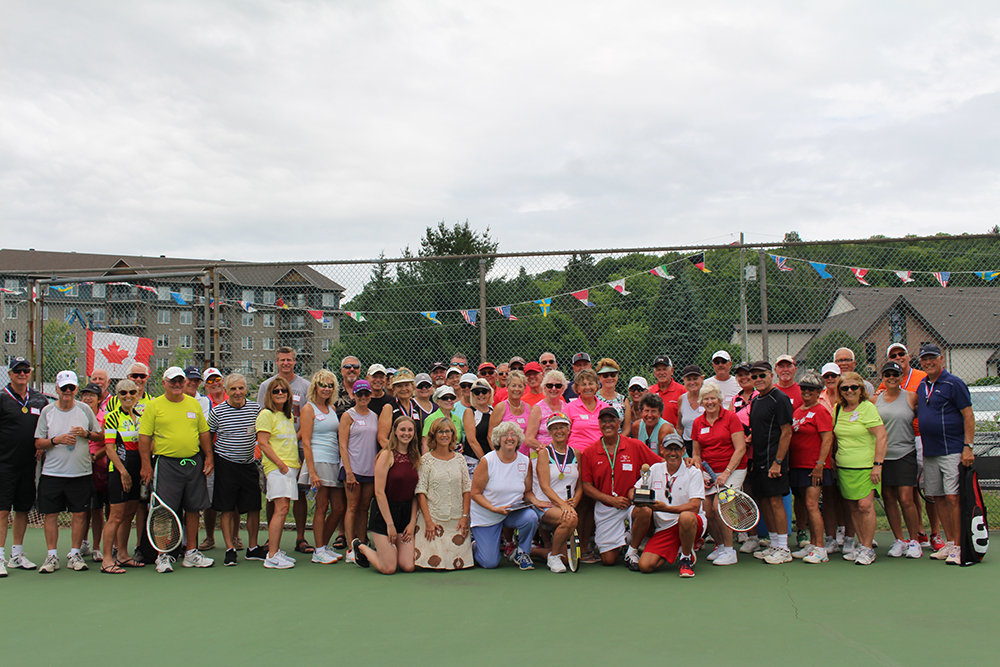 Haliburtonians and snowbirds from across the province joined together to serve, compete and reunite at the fourth annual Maple Leaf/Haliburton Triples Tennis Tournament July 16.

The tournament featured 16 teams and 48 players, made up of members from the Maple Leaf Golf and Country Club in Florida and the local Haliburton tennis group. The teams are sorted to mix skill levels with Haliburton native Jeff Cattell’s team emerging victorious after a three-game sweep in the best-of-five finals.

Cattell said his team meshed well together. He added the victory was sweet but the tournament was about something more than that.

“It’s all for fun and camaraderie,” Cattell said. “Winning’s a little bit of icing on the cake. It’s just a terrific group. There’s so much friendship that’s spread around far and wide.”

Snowbirds came to visit Haliburton for the tournament from as far as Quebec and Michigan, staying with billet families amidst the festivities.

Irene Stich came from London, Ontario after connecting with organizers in Florida. “It’s a nice setting here,” Stich said. “It’s beautiful and the people are so hospitable.”

The 16 teams played in a round-robin format, before a final match between the top team in each pool. But although there was a trophy to play for, the atmosphere remained friendly.

“Playing here, we’re all saying ‘nice shot,’ to the opponent and enjoying ourselves,” Stich said.

Organizers Greg Freeman and Jeff Papiez said they were happy with how the day went.

“They’re wonderful people. It’s a friendly competition, it’s a means of being able to remain active in a fun way, but still in a competitive way,’ Freeman said. “This year, we’ve likely got 12-15 new players as well which is terrific.”

Freeman said he would like to see the tournament continue, but noted things could change.

“We’d love to be able to say we’re going to host it every year. That may be the immediate plan, but who knows? That’s 12 months from now,” he said.

Cattell said the tournament acts as a nice reunion for the snowbirds.

“Seeing people you haven’t seen for six months. A lot of people orient themselves down south to Florida and the other half orient themselves to Haliburton,” Cattell said. “It’s a nice way to blend both communities together.”

Hockey and beer on tap for new Minden arena