What started as a Haliburton Highlands Land Trust project has now gone global.

Sheila Ziman, a Land Trust member who helped recruit people for the Turtle Project, said it has received a lot of attention from other countries.

“Paul Heaven, the Haliburton Highlands Land Trust’s project biologist, was contacted by an ecologist working with the U.S. Department of Interior’s International Technical Assistance Program,” a newsletter sent out by the Land Trust said. “He asked Paul for permission to present our project as a case study at a workshop entitled, ‘Highway Crossings for Wildlife’.”

The workshop took place in Thailand at the end of May and discussed the rapid development of The Delta and surrounding areas and included ministries from Vietnam, Laos, Cambodia and Burma.

In addition, Montana State University has asked to use the initiative’s data collecting methods. And, most recently, an ecologist from Quebec has requested to build the Haliburton-designed barrier wall.

The three-year Turtle Project started in 2015 with the hope of reducing turtle road mortality.

According to Ziman, there were more than 100 volunteers and 1,000 hours involved in the project.  In the first year, the Land Trust chose eight monitoring sites based on previously collected data about turtles in the area.

For the months of May and June, volunteers walked the one km routes, for eight hours a day, seven days a week keeping track of the number of turtles that crossed the road and cars that drove by.

“I think there’s so many people who care very deeply for the environment, that’s why they’re here,” said Ziman. “I corralled a lot of my friends to do it and they all said they were so happy to help because they felt they were making a difference.”

In 2016, a barrier wall was designed by Heaven to direct turtles under and through a culvert instead of over the road.

It was installed on Gelert Road and monitored through 2017 to see if it would work.

“So, this was the first one (turtle barrier) that people got really excited about because it wasn’t that expensive, it was very robust and it was doable and it worked,” said Ziman. We proved that where the wall was, no turtles got onto the road.” 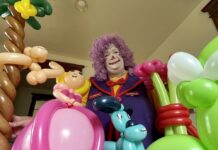 A new clown in town

Board mandates masks for young students