The Algonquin Gateway Business Association (AGBA) gave Wilberforce a taste of what’s on offer in their community with a Farm-to-Table event March 28.

The group hosted it at the Lloyd Watson Memorial Community Centre, inviting members and the general public to connect with local food producers. More than 20 people attended to sample the wares of eight different vendors.

“We don’t always have opportunities to go out to the farmers’ markets,” Kraus said. “What we’re hoping to achieve here is to get vendors to come out and benefit from our 92-plus strong membership.”

“It’s a great idea, just for local people to promote themselves and another venue to make sales,” Bramham said.

B’s Kitchen owner Melissa Burroughs said she was able to collect orders and network as a vendor.

“Businesses sometimes have a hard time getting their name out there, so this is just one more way of doing that,” she said.

Attendee Cheryl McCombe said she met with food producers she now plans to buy from.

“I feel it’s really important for local residents and local businesses to connect with those that produce, create, grow our food locally,” McCombe said. “It’s a hurdle that we all have to overcome and shopping farm-to-table locally is much better for everybody.”

Kraus said the event’s value for vendors is more about increasing their profile than dollars and cents. She added she would like the first-time event to expand next year.

“We were hoping more vendors would join,” Kraus said. “We’re hoping next year more people will come out and just exchange their information and let the community know that they exist.” 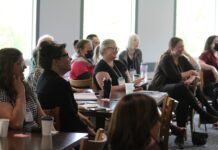 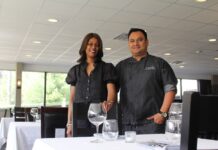 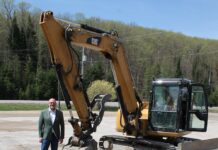 It’s all about the wood at The Toolbox