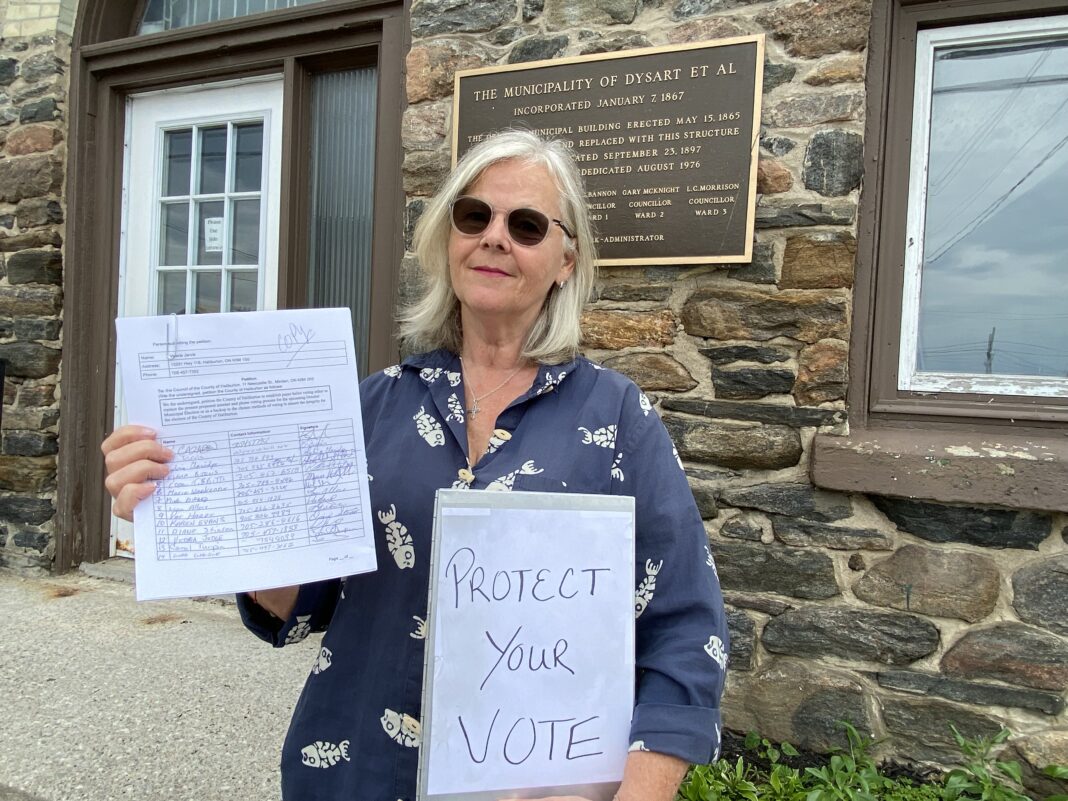 Local resident Val Jarvis fears many eligible voters across the Highlands will be left unable to cast their ballot in October’s municipal election after three of the County’s four lower-tier townships elected to scrap paper tally voting in favour of phone and internet voting.

A retired OPP officer, Jarvis said she has dedicated her life to upholding citizen rights.

The same petition was sent to Minden Hills, Algonquin Highlands and Highlands East.

All four townships made the decision last spring to embrace technology and transition to a new way of voting. Minden Hills, while offering phone and internet voting, also elected to maintain paper ballot voting for October’s election.

“Using computer and telephone technology will not only make future voting confusing and possibly out of reach for most folks, but, just as important, it will eliminate the checks and balances that we have come to trust,” Jarvis said. “I, and many others, would like to see a return to a paper ballot.”

The petition was received by Dysart et al council July 26.

It was noted the deadline to  make any changes to the election process, including how votes are to be conducted, passed in May. Dysart clerk Mallory Bishop outlined the process, stating voters would receive an information package with a unique personal numeric passcode.

When logging on to the website, they enter their PIN and answer a security question.

They can then vote, review and confirm. With telephone voting, people call a toll-free number, enter their PIN, and follow a touch-tone menu to cast their ballot. In her report to council April 27, 2021, Bishop said this new system would bring many benefits to voters and the township, including increased accessibility for persons with disabilities, seniors and seasonal residents; a lengthier voting window; better privacy; a reduction in election costs; less chance for errors or spoiled ballots; immediate results and improved engagement with young voters.

Jarvis felt many of those perceived benefits could also be seen as negatives.

She feels older residents who don’t use a computer or have poor cell reception will be left without an option to vote, while noting past issues with the voter list and distribution of voting packages could lead to some residents not receiving their unique PIN numbers.

She also suggested it would be much easier to manipulate votes via the phone and internet system.

While she realizes it’s too late to make any change for October’s vote, she hopes this petition will have an impact on future decisions in Haliburton County.

“If we have to have phone and internet voting, then so be it, but I think it’s important we reinstate paper ballot voting,” Jarvis said. “It’s a system that’s worked for many, many years. There are lots of people who just don’t do technology… They need to have an option too.”

With files from Lisa Gervais.