It was a night to remember for everyone affiliated with the Haliburton County Huskies as the fledgling organization battled to a 2-1 victory Thursday over the Trenton Golden Hawks, securing their spot in the ‘Elite Eight’ of the OJHL playoffs.

The win was enough to take the hometown team past the Golden Hawks in a best of three series. After dropping game one 5-2 on enemy territory, the Dogs rallied back in game two putting together a 3-2 win on home ice.

There was a tense atmosphere inside Duncan McDonald Memorial Community Gardens, with a crowd of more than 750 people on hand to cheer on the Golden Hawks.

After a nervy opening couple of minutes, the Huskies quickly got into their stride, opening the scoring through Christian Stevens with 5:22 played. Patrick Saini and defenceman Isaac Sooklal assisted on the play.

The Huskies had chances to extend their lead in the second, going 0-3 on the powerplay. The team killed a penalty of their own late in the period, after Lucas Stevenson was sent to the box for tripping.

The Dogs found themselves a man down again early in the third, Oliver Tarr handed a two-minute minor for slashing. The defence stood resolute and Cicigoi made a few important stops to maintain the Huskies’ lead.

There was pandemonium just a few minutes later after Noah Van Vliet got on the end of a Saini pass to double the Dogs’ lead. While Golden Hawks blueliner Tanner McEachearn bridged the gap at the mid-way point of the period, scoring on the powerplay, the Huskies held on for a famous win.

They will now take on the Cobourg Cougars in a best-of-five series to determine the winner of the East Division. Having finished above Cobourg in the regular season standings, the Huskies will get home advantage, meaning three games at S.G. Nesbitt Memorial Arena. Game one will take place Sunday, April 17. Puck drop is slated for 2 p.m.

During the regular season, the Huskies definitely had the Cougars number. Across eight games, the hometown team recorded five wins, a tie and two losses.

A win in the East Division finals would see the Huskies cross over for a best-of-five series with the South Division’s Toronto Jr. Canadiens or North York Rangers. 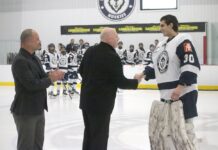 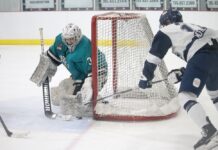 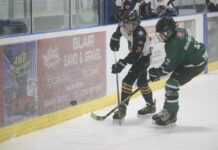