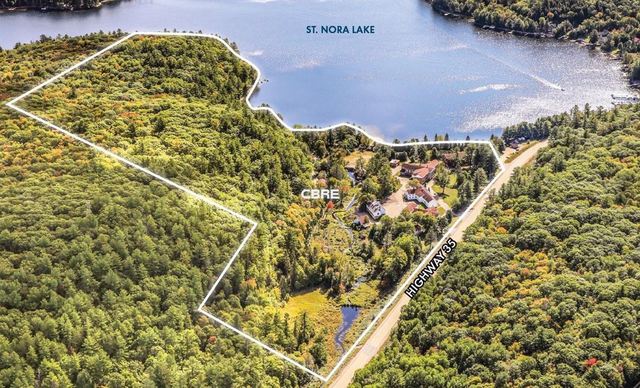 News the Frost Centre is again up for sale didn’t come as a surprise to a former employee or the mayor of the township in which it resides.

However, both Barrie Martin and Carol Moffatt have a keen interest in what might eventually happen at the former Leslie M. Frost Natural Resource Centre in Dorset.

Martin worked there for 24 years and Moffatt, before she became mayor, fought hard to keep the centre open. Since then, as mayor of Algonquin Highlands, she’s watched the Frost Centre story unfold.

A ‘for sale’ sign went up Oct. 29. Infrastructure Ontario, the Crown agency that manages provincially-owned infrastructure and real estate, has enlisted CBRE Limited Real Estate Brokerage, which is offering the 40.63 acres of waterfront land, with 21 buildings, full kitchen, dining hall and recreation centre, for $1.1 million.

Martin told The Highlander the centre’s closing in 2004 was a tragedy and “hopefully it’ll be acquired to serve the broader good, but who knowns who’ll buy it and when they’ll buy it.”

Since the listing went up last week, Martin said it’s created a social media buzz. He said he’s even been approached by a couple of people about taking a leadership role in purchasing and developing the property but he is not interested at this point. However, he said he was happy to lend support.

Martin was on the Friends of the Frost Centre that had some ambitious plans, such as a leadership camp. He added that with the trails, some heritage designations and easements, he hopes whoever buys it sees that as an opportunity rather than a limiting factor.

Asked about his vision for the property in 2020, Martin said it would involve a lot of partners coming together, both local and other.

“And they would build a facility that would serve to educate people about natural resources and ecology and climate change – all of those things we’re all worried about.”

He added, “really people coming together in this current climate and dreaming and thinking about what could be and then making it happen with some good leadership and investment.”

Moffatt said for her it’s about honouring the history.

“We need to preserve this piece of our local story. It’s my hope that the heritage of the Frost Centre and its importance in the community is woven into whatever becomes of the property,” she told The Highlander.

She said the township wasn’t surprised by the sale, but it “ushers in the final blow to what Leslie M. Frost himself said about the new school in 1944, ‘this school may well be the forerunner of other such establishments in Ontario’.”

Moffatt said the township toured the facility in August 2013 when the province was making it surplus. She said there had always been hopes about Algonquin Highlands centralizing the Stanhope and Dorset operations into one place and perhaps developing an accommodation-based recreational program to go with the trails system. “There were lots of ideas.”

However, she said the condition of the facility was “disheartening.” The township realized the size of the property and the amount of work needed made it too expensive. However, they secured their trails system and had the area where the trails office is severed with a long-term lease.

Moffatt said the Frost Centre was a fixture of the community and an incredible link to community, education and natural resources.

Moffatt said she’s been in the centre since it closed and, “each time we wandered the barren halls and stood in the empty classrooms, there was a tangible sadness; you could feel the memories.”

Minister of Infrastructure and local MPP Laurie Scott said, “its time has come.” She added she is optimistic that there is now an opportunity for the centre to be something different while respecting its heritage. “There’s lots of good news that could come from it. Let’s get moving forward with an opportunity for economic development.

Behind the scenes with Haliburton’s vaccine volunteers