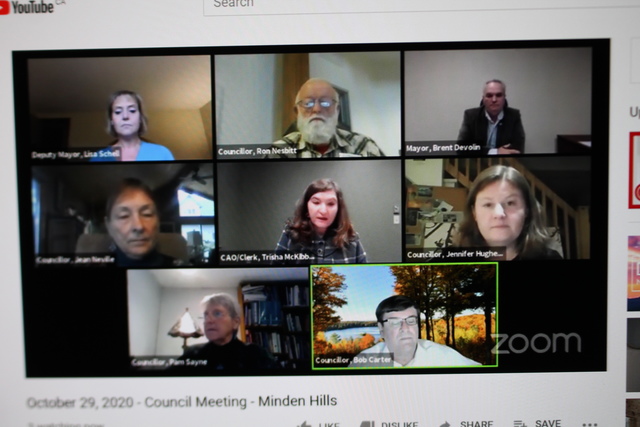 Minden Hills has hired a new director of community services who’ll spearhead the reopening of the S.G. Nesbitt Memorial Arena and Community Centre.

Mayor Brent Devolin told the Oct. 29 council meeting, and members of the public tuning in on YouTube, that Craig Belfry has joined the corporation effective Nov. 2.

Devolin, during the Mayor’s Report on CanoeFM last week, also updated progress on the $12.7 million arena and community centre project.

He said it recently passed two major thresholds, that of occupancy and substantial completion. That means builders MBC have turned the building over to township staff.

“So, now it’s the beginning of staff taking over the building and operationalizing it,” he said. The mayor said in normal times this is challenging so with COVID-19 even more so. He said hiring Belfry is now key.

“It’s been a long time, the better part of the year almost since we had a director of community services, and certainly while this facility is being built that hasn’t been a big deal.” However, with the need to make the arena and community centre operational, Devolin said it now is.

Belfry was recently manager of recreation and culture at the Corporation of the Township of Scugog. He has been hired to replace Mark Coleman who left in December 2019.

“Craig comes to us with 20 years of experience in the Brock, Springwater and Scugog municipalities, so central Ontario, somewhat similar circumstances to our own, and so it’s really good to know that somebody that comes with a full toolbox is ready to take over a newly-minted facility to begin to operationalize it as we go forward,” Devolin said.

The mayor said he knows the public wants to know how soon the facility can open.

“Obviously, that’s the first and primary task of Craig coming on board. I would expect, within a month or so of him being in his position, to roll out for the public when it will open.”

He said with COVID, it is going to be a staged approach.

“There are areas within the new complex that have different risk factors when it comes to COVID,” Devolin said. “And I’m hoping if all goes well that before the end of the year that we’ll be back doing some of the more normal things that we do in that facility that’s been offline for about a year and a half now. So, I think we’re all looking for a little joy to do some of those things that we used to do and maybe some new ones.”