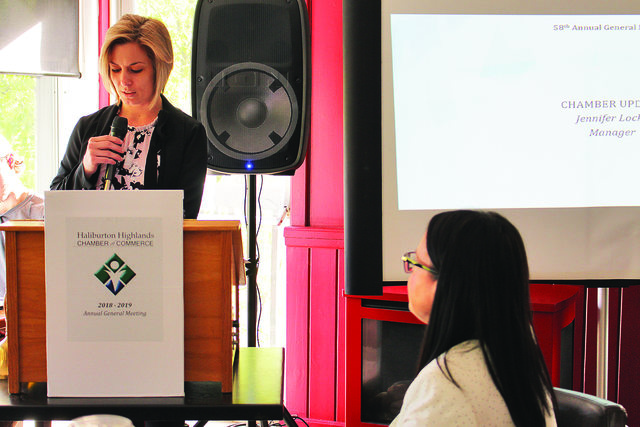 Half of local businesses taking part in a chamber of commerce survey said they’d had to permanently or temporarily dismiss staff due to COVID-19.

It was just one of the findings in a September Haliburton Highlands Chamber of Commerce survey.

The chamber recently released findings of a micro-survey it conducted in conjunction with the Ontario Chamber of Commerce.

“As our communities wind down from the busy season in the Highlands, this survey provides a snapshot of the local business conditions and attitudes,” Locke said.

She added many local chamber members participated in the questionnaire and as a result there are some regionally-specific results.

Those include getting a pulse of how businesses feel about their local communities and their ability to thrive in those regions, despite what might be a pessimistic national or provincial outlook.

She said 39 per cent of survey respondents said no to their ability to thrive, 48 per cent yes and 13 per cent were unsure. In addition, 32 per cent reported a lack of business confidence in the local economy, while 50 per cent of local respondents lacked such confidence at a provincial level.

Chamber board chair Andrea Strano said, “it is not surprising that half of our local enterprises had to temporarily or permanently dismiss employees; this is going to result in community-level impacts for many months to come.”

She added, “the pandemic has disproportionately affected certain sectors – accommodations, food services, arts, entertainment, recreation and retail have all been hit heavily.”

Locke said regional insights can be further explored on the OER Survey website.

The next wave of the survey is currently underway. The new survey link is research.net/r/2020_Wave 2_OCC?Local_ Chamber=[Haliburton].

The three-minute survey on business confidence, pandemic recovery and government support programs will help inform the upcoming Ontario Economic Report and the advocacy of the Ontario Chamber of Commerce, Locke said.

This survey was fielded by the Ontario Chamber of Commerce from September 3-23.

The County of Haliburton’s Department of Tourism also conducted a survey in mid-September.

Director of tourism, Amanda Virtanen, said the department had been hearing conflicting anecdotal accounts that some businesses were having their best summer ever and others were on the verge of having to close permanently.

“Therefore, we wanted to ask specific questions about revenue and visitation post-summer and leading into fall,” she said.

She said the survey was open for a two-week period, closing Sept. 28, and was sent to all tourism-focused operators. She said they got a 20 per cent response rate. Of those, 38 per cent were accommodators, 22 per cent experience providers, 20 per cent food establishments, 12 per cent retail and 18 per cent other.