Home Arts Story of Pinch a real gem for Bainbridge 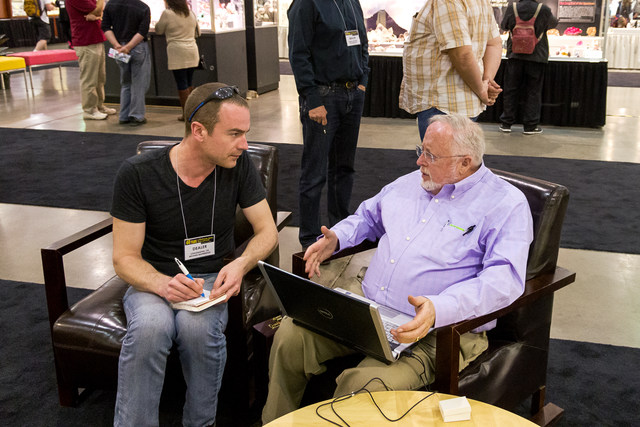 It’s been 10 years in the making, but Minden’s Michael Bainbridge has written and photographed one gem of a book.

Titled The Pinch Collection at the Canadian Museum of Nature, Bainbridge wrote and photographed the 278-page book.

It’s been printed in Utah and has now been sent to the bindery. That milestone, marked on Facebook by Bainbridge and his wife Brigitte Gall, “represented the end of my ability and need to do anything more,” he said.

The only mineral photographer of his calibre in Canada, and one of only a handful in the world, Bainbridge said he embarked upon the project in about 2008.

He was working on a contract to photograph the national mineral collection at the Canadian Museum of Nature, or CMN, and was regularly submitting photographs to Lithographie for publication in their Mineral Monograph series.

Lithographie is this book’s publisher. Bainbridge said publisher and editor Gloria Staebler noted that William W. Pinch of Rochester, New York, and his collection fared prominently in the work. She suggested his collection might be a worthy subject for a book.

Bainbridge met Pinch in early 2010, and by the end of that year had an agreement with the museum to allow access to photograph his collection for a book. The Ottawa museum had purchased Pinch’s collection in 1989.

“The collection itself is spectacular and well worth the photographic treatment it received in the book,” Bainbridge said of the 535 colour photographs. “But it wasn’t until much later, after many hours of interviews with Bill and others, that the full interest and importance of the story became clear,” he added.

“In addition to being Bill’s story, in many ways it is also the story of the hobby and science of specimen mineralogy itself.”

Bainbridge said high points of his research include: the founding of the Smithsonian Institution, and the Canadian Museum of Nature, cloak and dagger intrigue behind the Iron Curtain, Internal Revenue Service (IRS) investigations, and a 60 Minutes exposé.

Bainbridge began work in earnest in January 2011 but there were setbacks, such as Pinch being ill, Minden floods in 2013 and 2017, a death in the publisher’s family, and COVID-19.

In addition, he had to work on the book in his spare time, away from his paid job and family. There were interviews with people from all over the world, many done over nine years of visits to the Tucson Gem & Mineral show. For the photographs, he had to travel to the museum in Ottawa.

“I would pack up my gear and spend weeks at a time going through the drawers at their collection facility in Aylmer, Quebec and photographing the best.”

He estimates he spent several months at the museum.

“I easily spent at least a full year working on the book,” he said.

Bainbridge said he’s been fascinated by minerals, gems, and fossils since childhood. In 2007, he started experimenting with photographing gems and minerals in his basement. Soon enough he got pretty good and started submitting his photos to hobby and trade magazines. He then answered a tender to photograph the national collection. He made a name for himself in the broader mineral collecting and museum community.

With the book nearly done, plans for a launch have been largely scrubbed because of COVID-19.

“As it stands, I’m afraid we don’t have a plan as to how to launch the book, but I imagine we’ll start trying to figure that out …”

“Of course, Brigitte and I plan on hosting some sort of an event in Minden or Haliburton as well.”

Mineral curator at the museum, Erika Anderson, said the work is of great significance.

“His work is important as it highlights such a significant part of the National Mineral Collection. The acquisition of the Pinch Collection had a great impact on the museum as it provided fantastic specimens for display in our Earth Gallery as well as specimens for scientific research. The Pinch Collection made such an impression on the public that I still get asked about it during our annual open house. I’m happy to see a publication that will show more great specimens from the collection that are not on display,” she said.

Staebler said there’s no doubt that for Bainbridge it was a labour of love.

“Absolutely. But Michael is an empath and through his work he felt Pinch’s triumphs and failures. But he also felt the disappointments shared by Pinch’s family; the adoration felt by the people Pinch mentored; and the bitterness of Pinch’s rivals. In addition, Michael was surely pressured by his own advisors and by me.

“All that empathy made for an emotional 10 years, and it stalled Michael sometimes, but it also forced him to stretch as a writer, to focus on the objectives, and find creative ways to express Pinch’s humanity. I don’t think it is insignificant that Michael turned in his draft of the manuscript in June 2017, two months after Pinch died.”

Asked how he feels now that his part is done, Bainbridge said, “I haven’t really taken a moment to step back and soak it in. It’s been right on to the next thing.” That next thing is a puzzle factory in Haliburton County. “But I promise I will allow myself a proper rest and celebration and a good sniff of the book when I get the first box,” he said.

The Breakfast Club comes to Haliburton