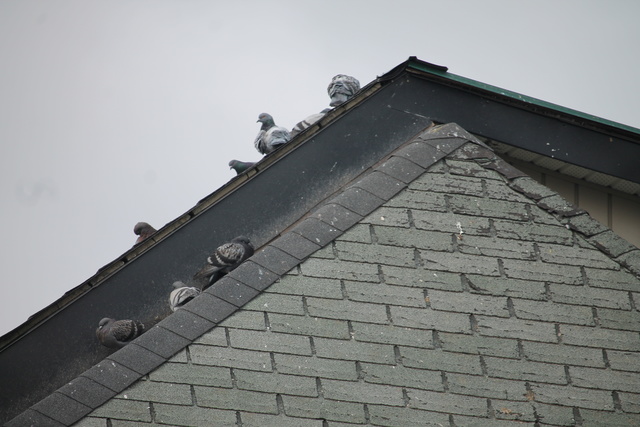 Downtown Minden’s pigeons have been given a stay of execution – at least until council’s May 28 meeting.

Director of public works, Travis Wilson, tabled a report on the mitigation of pigeons at the May 14 committee of the whole meeting. The report stemmed from a letter of complaint by Stan Russell to the township on the March 12 council agenda.

He said both were knowledgeable in the field and had provided an extensive proposal.

“Both propose placing baited live traps on any flat roof occupied by the pigeons (subject to any requirements for owner permission),” Wilson’s report said. “The traps would be checked regularly, with the pigeons taken off site and euthanized.”

He added that in order to successfully trap pigeons, the birds will need to become accustomed to the traps. This would entail pre-feeding them without having a trap set, and contingent on others not feeding them. The traps would then be set with the essentials for life, shade, water, and feed. Pre-feeding could be conducted on the rooves currently inhabited, or baited on the municipal building, his report said.

Wilson said Eco-Choice has also recommended that if these measurers become ineffective, since pigeons will learn that food leads to traps, that they employ a form of birth control in the pigeon’s food. Wilson said it’s approved and endorsed by the humane society as a humane control option.

He recommended going with Eco-Choice, saying it had provided a price of $50 per visit for a weekly service, for 30 weeks, and a $1,500 contingency for equipment and or birth control feed.

Coun. Jean Neville said she’d only noticed a small number of pigeons and wondered if the issue had been dealt with or if the pigeons had moved on.

However, Mayor Brent Devolin said “there’s in excess of 100 and, no, they haven’t gone away.”

Neville said if they went with birth control feed, it might have to go on indefinitely but Wilson said only until the situation improves.

Coun. Bob Carter had a number of questions, including whether staff had talked to other municipalities with the same problem and received references from the companies about successful pigeon mitigation. Wilson said he had not talked to other townships but what was being proposed was a straightforward process.

Carter also said he’d heard people are feeding the pigeons and he knows of their roosting in abandoned buildings in town.

“Would it not make more sense to cut off their food and shelter and make it seem like they’re not welcome? I’m a little worried that this just seems like another open-ended contract that may go on forever and ever amen,” Carter said.

Coun. Pam Sayne agreed the township should “focus on feeding, and what’s drawing them to downtown at this point, than throwing more money … a better, conservative approach right now.”

Deputy Mayor Lisa Schell wondered about a two-pronged approach, what was being recommended and working with businesses to close off roosting sites. For example, she said the old theatre is a haven for pigeons.

Carter asked if owners could be held responsible.

There was talk of the former theatre changing hands with a possible demolition. Carter said he didn’t want to wait months. Coun. Ron Nesbitt agreed. “At least close it up. Educate people not to feed them. There is disease from the excrement.”

Former owner Rahim Lakhani said he had sold the building but did not know the new owners’ plans.

Council received the report as information and will vote on it at the May 28 meeting.

“They need to be gone,” Devolin said. “It’s getting increasingly worse. Just walk from the bridge by The Dominion every day and observe the excrement that’s there.”