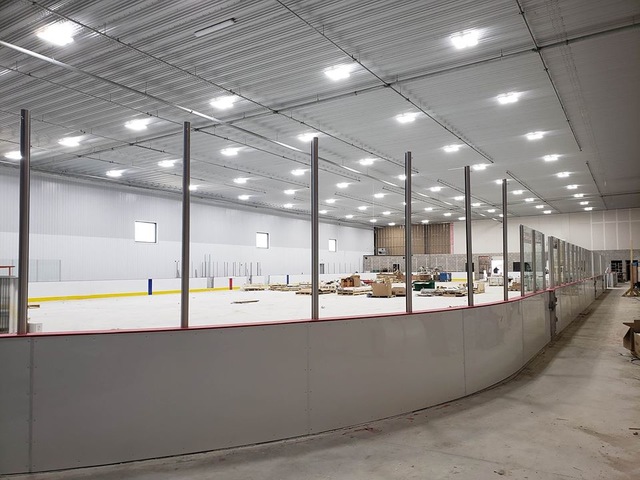 Builders have returned to work on the S.G. Nesbitt Memorial Arena renewal project.

McDonald Brothers Construction of Ottawa returned to the building site May 6 after a COVID-19- induced month-long hiatus. They had stopped work April 3.

In a recent interview, Peacock said they are putting finishing touches on the project. She said that included drywall, some masonry, and painting and tiling that was being done when the site was closed down. As for the outside, she said pending work includes some exterior siding and roofing, landscaping, curbs, sidewalks and paving. She added that millwork and flooring will be started approximately four weeks after last week’s start-up.

Devolin said “operationally, there’ll be some stricter parameters again. But given the nature of that project, most of the people can work and not be in proximity of two metres of each other. And in those few circumstances that some of the work might require that, there will be significant higher standards than before the shutdown.”

Devolin said it’s expected the project will be finished in July.

Asked about the fundraising committee he originally said could raise upwards of $1 million – but which is not in place – Devolin said, “that will come back and be a council conversation again.”

He said there are three to four elements in play, including the fact the township is in the middle of hiring a new CAO, clerk and director of community services. He said the fact the project is near completion, and the township will be able to spend an Ontario Trillium Foundation grant on interior add-ons, does not preclude the formation of a foundation.

He said a lot of community centres have foundations, or groups that support them on a perpetual basis, as facilities age and townships need to replace things, or add new technology or expand capabilities.

Addressing the somewhat controversial nature of the project, Peacock said like many municipal undertakings, “there will always be detractors for whatever reason.” However, she said “I feel that once we get the new complex completed and open, people will be amazed at the facility and all the features we have tried to include. “The people will see that not only is it a sporting complex but it can be used for so many other community activities. The multi-sport area has been constructed to be used not only for sports but also for other things. I can see artisan markets, community dinners, theatre, fundraisers and so many more ideas.”