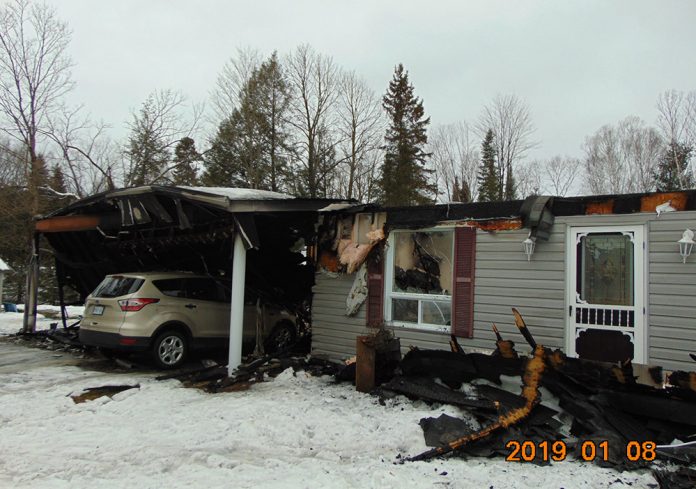 Firefighters successfully put out a structure fire which fully engulfed a home on Wigamog road Jan. 8.

In a press release, Dysart et al Fire Chief Mike Iles said firefighters responded to a call at 3:46 a.m. with 17 firefighters and seven firetrucks. Nobody involved was injured by the fire, but the house is a complete loss, with damages estimated at $250,000, Iles said.

Iles said in an interview the residents of the home were awoken in the morning by their smoke alarm.

“The smoke alarm did save their life,” Iles said. “They were able to evacuate the building after hearing the smoke alarm.”

The cause of the fire is still under investigation, Iles said.

Firefighters arrived on the scene at approximately 3:58 p.m. according to a press release. Minden Hills Fire Department also responded with two fire trucks as mutual aid assistance. Firefighters were able to confine the blaze to the attic and south end of the structure before putting it out.

Although the structure was heavily damaged, the house is still standing and Iles said the family was able to recover some of their belongings.

“The firefighters on scene did an exceptional job to stop the fire when it was fully engulfed in fire through the roof,” Iles said.

The incident is a reminder of the importance of having working smoke alarms, Iles said.

“I hope we can get the news out and hopefully have some people check their smoke alarms for batteries and expiry,” Iles said. “Hopefully, make the people aware.”